Windsong Productions takes their business to the APEXX

When BOXX announced the introduction of the APEXX 5, the most advanced workstation in the world, Windsong Productions, an up-and-coming Central Valley, California production studio, was first in line—thanks to the legwork of lead colorist and motion graphics artist Jeremiah Belt. An avid BOXXer, Belt had relied on BOXX systems long before joining Windsong and throughout his career, continued to keep track of the Austin, Texas-based company and their innovative, high performance computer workstations. On behalf of Windsong Productions, Belt kindly agreed to the following interview. 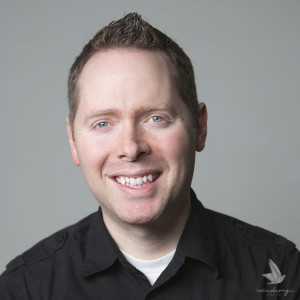 Tell me about Windsong Productions.

Windsong Productions is a California-based, full-service creative production company. Since 2011, we’ve been producing commercials and web videos, as well as providing post-production services for TV shows. More recently we’ve expanded into full TV show and documentary production. By investing heavily in creative services, in addition to equipment and technical know-how, we’re able to manage every single aspect of production, from concept to filming to graphics to color correction. We love every part of the process. 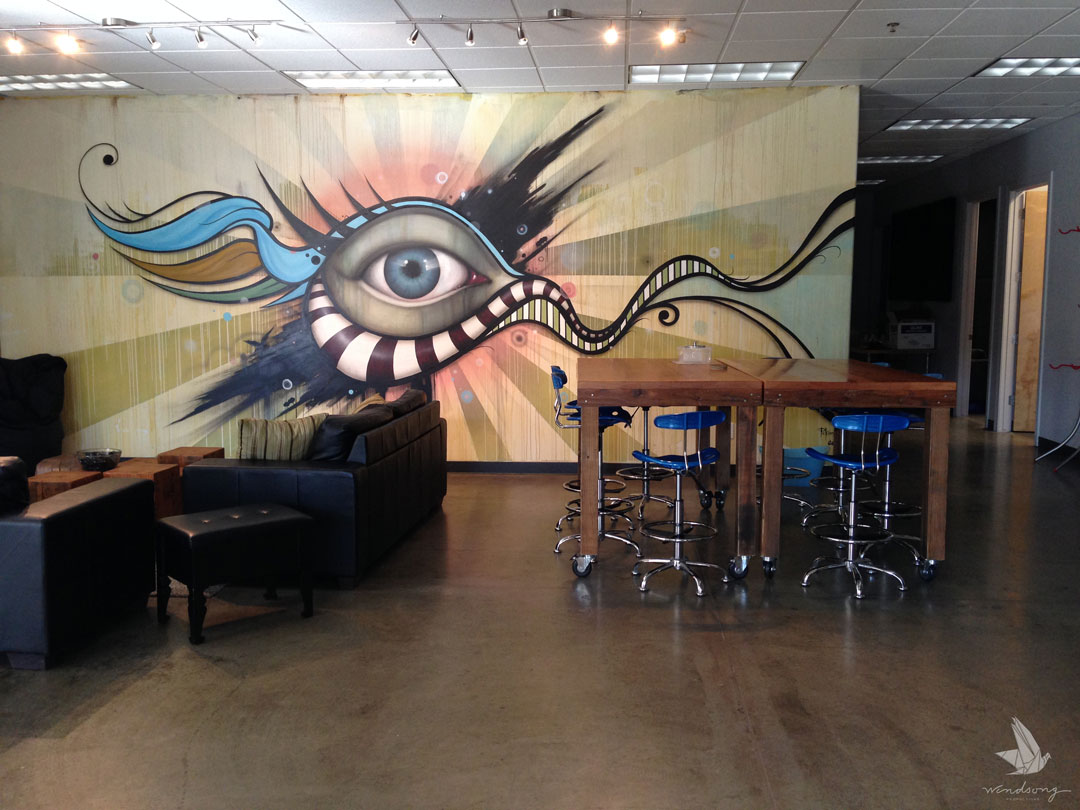 Take me through your creative process, i.e., the typical steps involved in a project.

Depending on the project, we may be asked to concept and develop our own ideas, or we may just be executing a specific vision that a client already has. In any case, there’s a lot of collaboration amongst the team, brainstorming and trying to figure out the absolute best solution for whatever specific task we’re working on.

In a related question, describe your production workflow, the software applications you rely on, and the challenges your workflow presents.

The early development stages include writing, storyboarding, and animatics. For production, we offer the full package of tools and creative, directing, cinematography, wardrobe, lighting, and shooting on our RED Epic Dragon camera in 6K. During post-production we rely heavily on our Fibre SNS EVO SAN shared storage system of over 192 TB. Software-wise, we’re primarily an Adobe house for post purposes, using the entire spectrum of apps in the Adobe CC suite. For 3D modeling, animation, and rendering, we use Maxon Cinema 4D. For feature color grading, in compressed to fully uncompressed 6K formats, in realtime we use DaVinci Resolve. We also use Mocha Pro, Pro Tools, Video Copilot plugins, Red Giant plugins, Greyscalegorilla, RED Tools, and Blackmagic I/O cards. The challenges in our workflow mostly stem from sharing assets and communication between the 7 or 8 workstations in the studio. The SAN goes a long way in allowing collaboration. 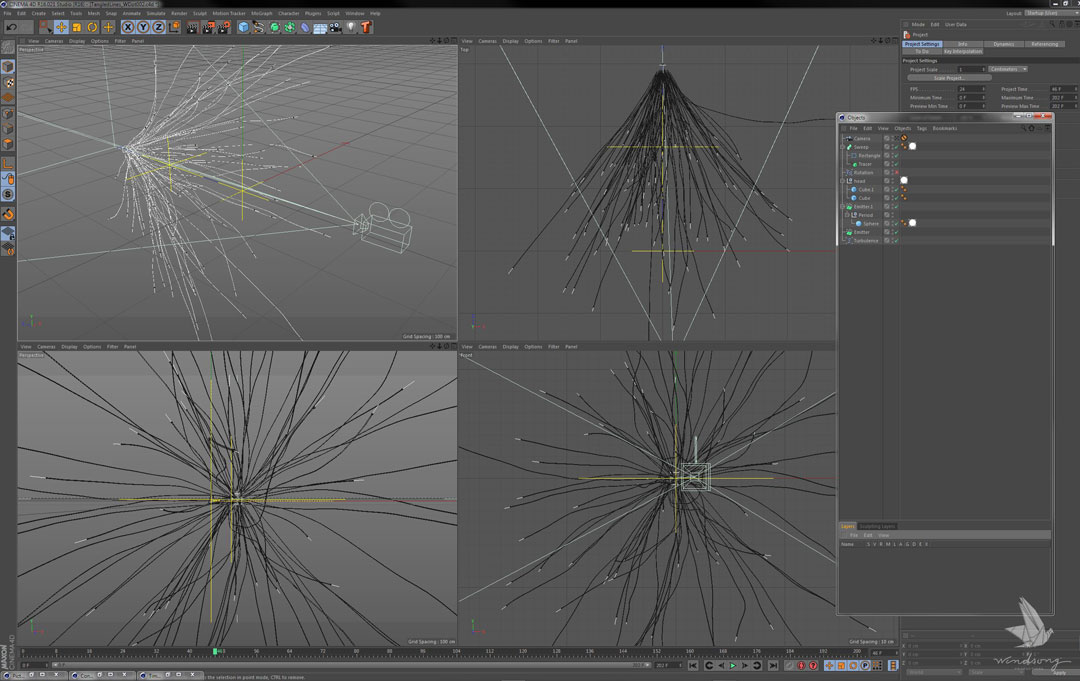 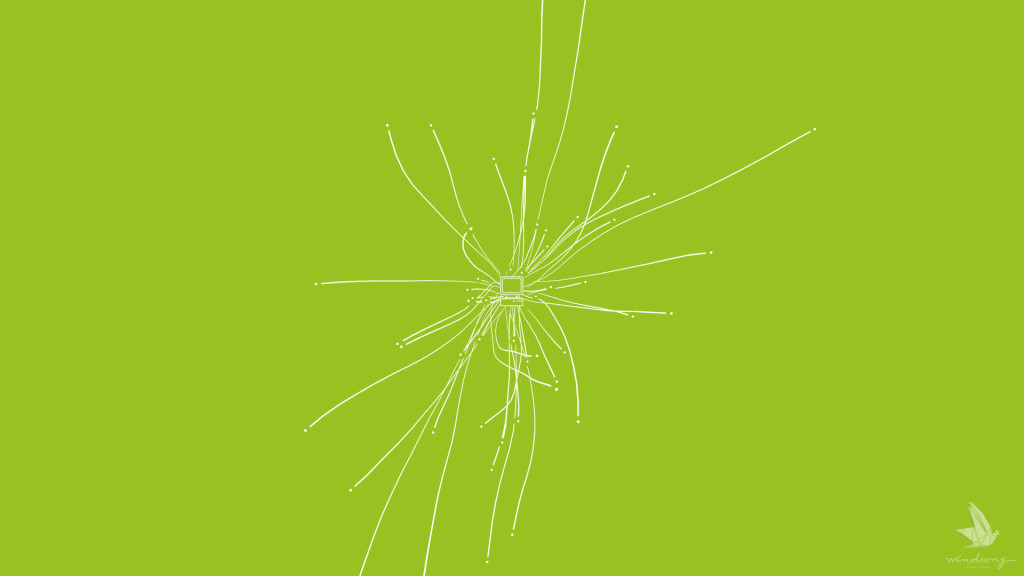 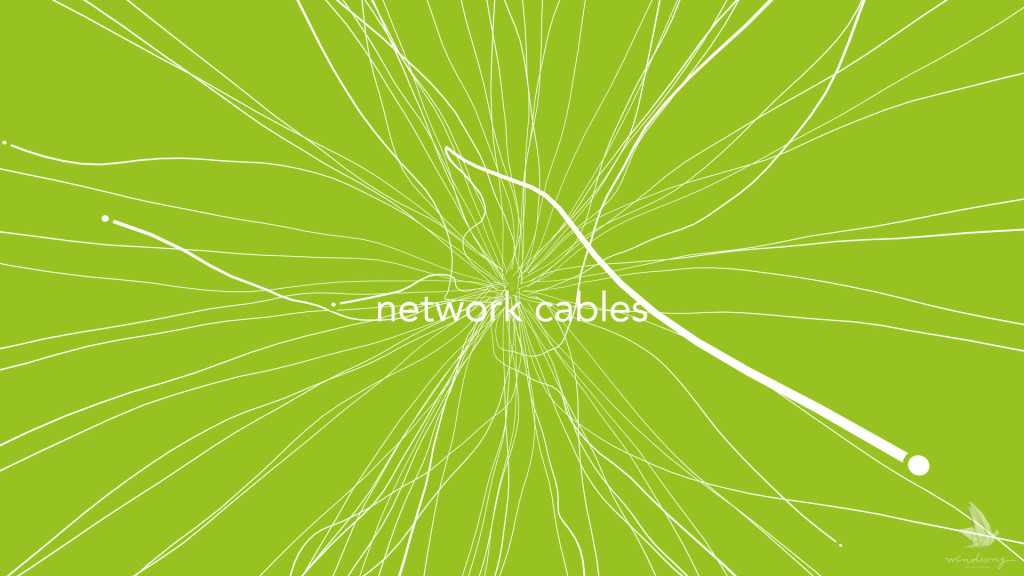 Prior to your APEXX 5, what type of workstation or renderers were you using?

Prior to the APEXX 5, Windsong was entirely a Mac house. As professionals, we need the most expandability and flexibility we can squeeze out of our workstations, software, and tools so we chose to purchase an APEXX 5 for our newest work.

How did you become aware of BOXX?

In the past I had used BOXX workstations for editing and 3D architectural rendering. Over the years, I always kept tabs on BOXX. I’d visit with reps at NAB almost every year.

Which BOXX performance specialist did you consult with?

I worked with Dustin Leifheit. I met Dustin years back attending the NAB convention in Las Vegas. Having worked on BOXX workstations in the past, I had a soft spot for the machines and company. As I said, I kept tabs on them and always checked out BOXX at the Intel booth or in other booths they were showing at NAB. I ran into Dustin several times over the years and picked his brain about my home studio system options. When it came time to spec out a machine for Windsong, I went to BOXX first. After a few moments on the website, a chat window popped up with Dustin's name, and we began discussing the new machine. At the time, a workstation with the CPU power and enough slots to support our needs was hard to come by. Dustin mentioned the upcoming APEXX 5 workstation and how it might fit the bill. He checked with the engineering staff and got back to me with the details. Over the next month, we configured multiple versions of the load out before finally settling on our workstation. Dustin was a huge help the whole way, very personable and knowledgeable. It was a great experience. 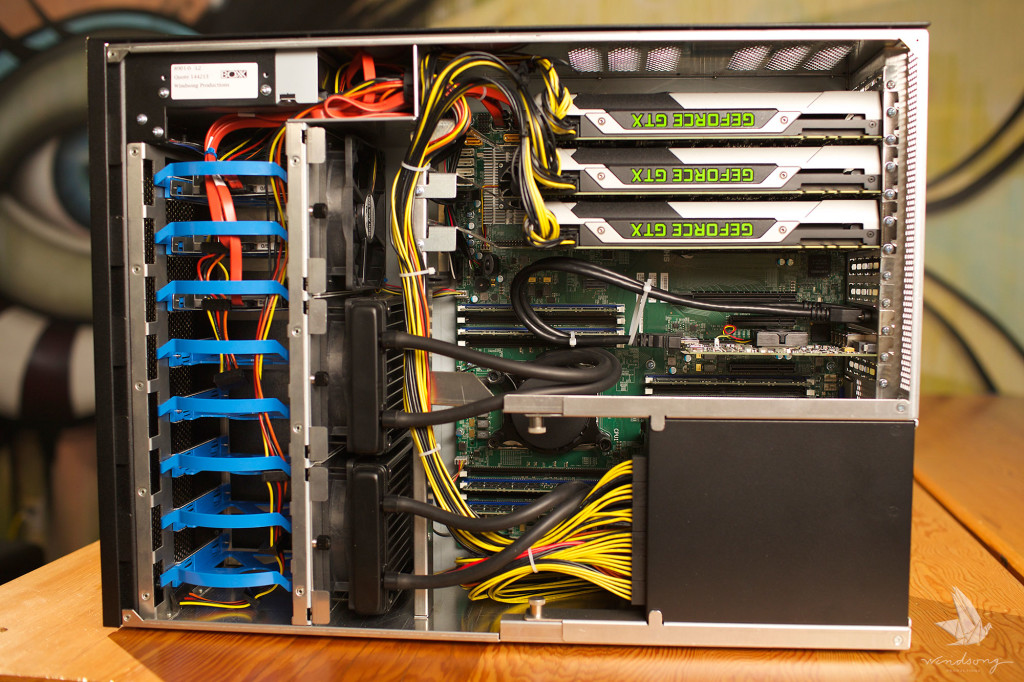 Describe the experience of working on your APEXX 5. How does it differ from your previous systems?

The APEXX 5 is different in many ways from previous systems. For one, it's a turnkey solution, yet completely customizable. Before the APEXX 5, I built my own dual Intel® Xeon® workstation, because at the time there wasn't a machine that could fully suit my needs. That took months of troubleshooting. Before that, it was Mac-based workstations, which were great due to their robust Unix-based OS, but not very flexible in setup, options, and upgrades. Plus, they always lacked the most powerful options in the market. The APEXX 5 also has the most PCIe slots, cores, and memory of any system we’ve worked with. 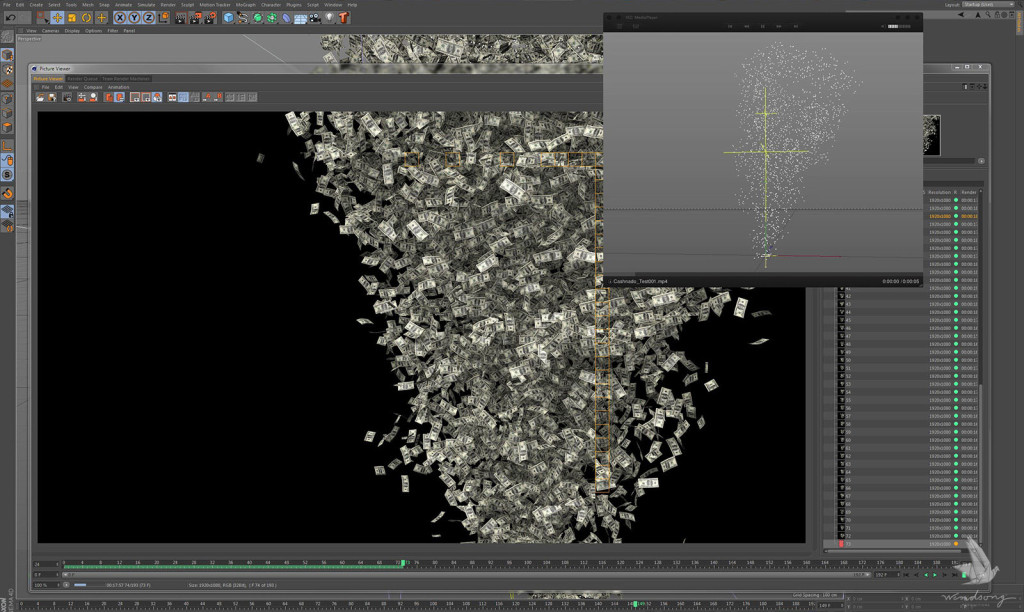 What type of workflow problems has it solved?

The main two purposes of our new APEXX 5 at Windsong are feature-level color grading and 2D/3Dmotion graphics. Finding a system that can handle these two very different worlds in the same box was a challenge. For color grading at 4K to 6K resolutions in RAW and uncompressed workflows, it requires alot of GPU horsepower to handle the color processing in real time. We needed at least three GPUs, with the option of expanding those or changing them out in the future. For motion graphics and 3D work, we needed a lot of CPU power and cores. A single-processor system wouldn't do. The more cores we have available, and the more memory to feed them, the faster our 3D renders would be. Hard drive speeds and transfer rates were also a big concern with the sheer file size, speed, and layering we would be doing. The APEXX 5 was the only option for this. We are running dual Xeon E5-2687W v3 processors for a total of 40 high-clock cores. Three double wide NVIDIA GeForce GTX Titan Black GPUs with 6 GB of RAM each. A 4-port 8 GB Fibre card was installed attached to a dedicated RAID 50 portion of the SAN achieving over 1,600 MB read rates. A Blackmagic 4K Extreme card, and 128 GB of RAM. It’s all whisper-quiet for the amount of horsepower under the hood. We have it rack mounted with the SAN and run all the lines to the artist’s office.

Have you ever had to rely on legendary BOXX Technical Support?

I've only had to chat with tech support a few times regarding Windows hibernation and virtual disk space issues taking up more space than I had thought on the boot raid. The support was very succinct and knowledgeable and helped solve any road blocks I ran into.

What has the APEXX 5 meant in terms of time saved, money saved, or making critical deadlines?

We were one of the first to purchase the APPEX 5 back in December of 2014. As I mentioned previously, I discussed our needs with BOXX and not really finding a solution, it was suggested that this new system in the works would be the answer. That kind of problem-solving and configuring was a huge sell. In the short time we’ve had it in the studio, the APEXX 5 has already proven itself by smashing render times and complex workflows in a fraction of the time it took other systems. Surprisingly, it sometimes has too much power for software that isn't optimized for so many cores, and we’ve had to wrangle that back. 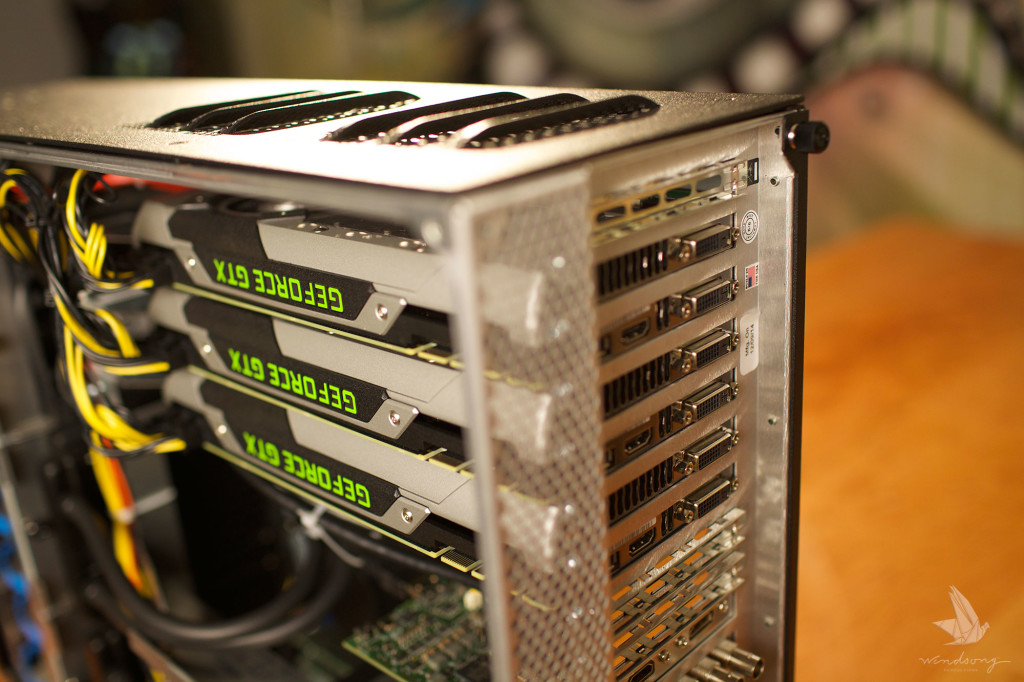 A nice problem to have?

Yes--it's an impressive beast of a computing machine and will save us hours of render time. Several large 3D projects are approaching in the coming months, and having this much render power will be a huge asset and may even hold back the need of a render farm for awhile.

Well, if the need arises, we can always offer you a renderPRO, renderBOXX, or better yet, a ROW: RenderFarm on Wheels. Speaking of, discuss the future of your work and how you see your APEXX 5 system or BOXX in general as being part of that future.

This system will be the cornerstone of the motion graphics and color grading department at Windsong Productions for years to come. It can grow and adapt with us as we continue to grow and expand our operations. This sort of technical and creative freedom will surely spill over into other departments in the future and I foresee BOXX being a large part of that. 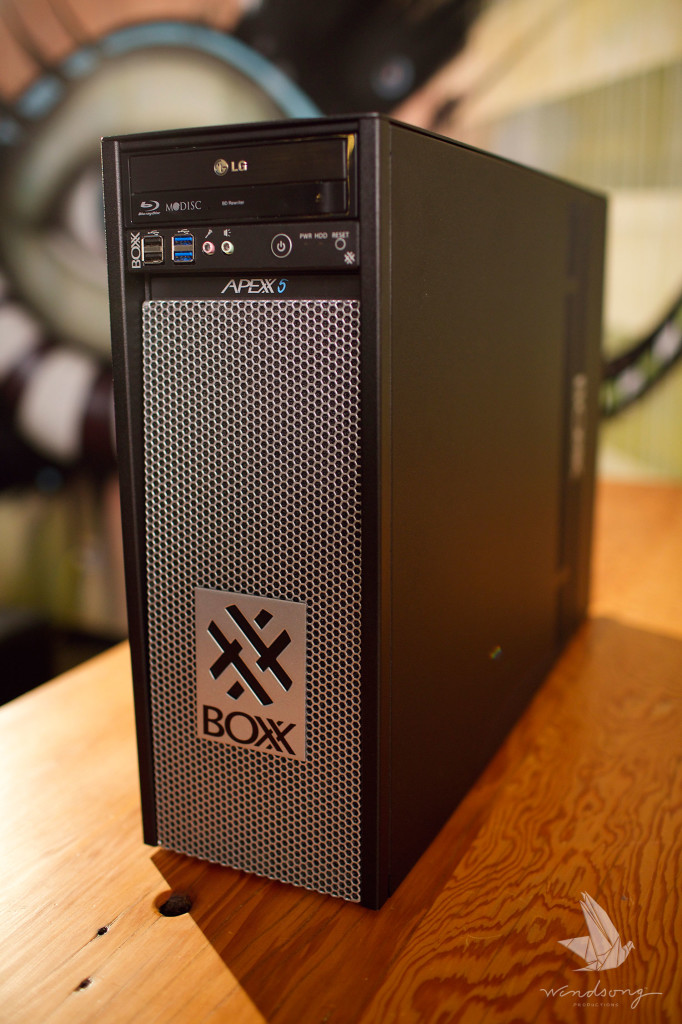