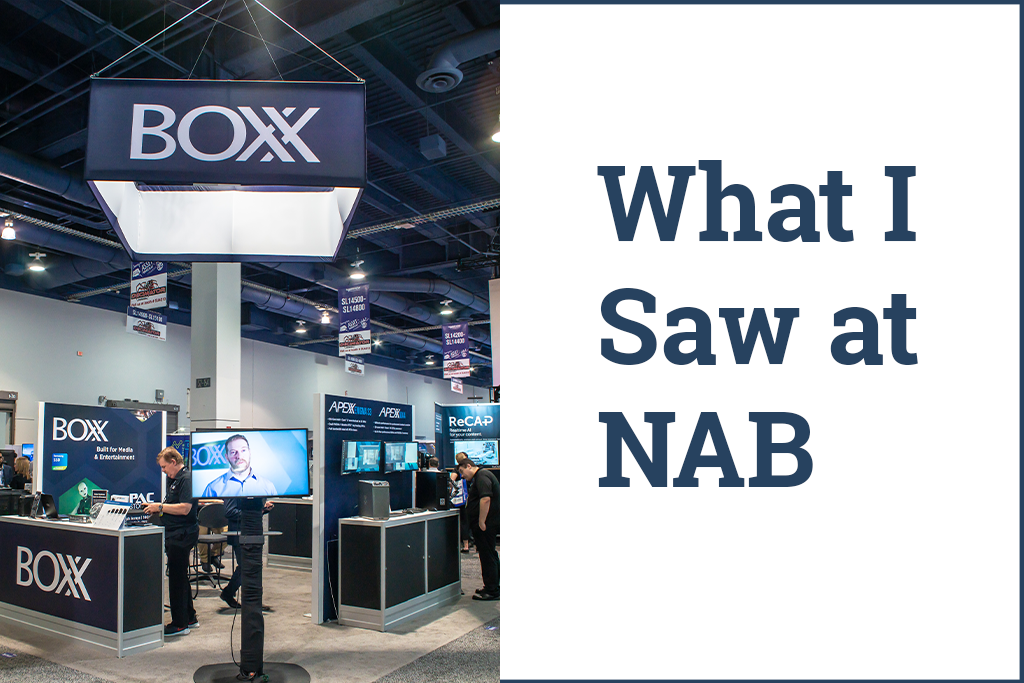 What I Saw at NAB

At the 2019 NAB Show in Las Vegas,  BOXX introduced the APEXX W4X, a workstation purpose-built to accelerate rendering and memory capacity, making it ideal for motion media applications like Cinema 4D, which it so ably demonstrated. In addition to the APEXX W4X, we showcased the new APEXX X4 workstation featuring overclocked Intel® Core™ X-Series processors, up to four professional GPUs, and 128GB of memory. Demonstrating Autodesk® Maya® and Arnold, APEXX X4 is ideal for editing feature films, deploying VR, and multi-tasking in complex production pipelines. We had great conversations with strategic partners like Intel and Asus (who dropped in to photograph the X4 since it also features their motherboard).

BOXX may have made their name on powerful desktop workstations, but sometimes lost in the shuffle is our line of mobile workstations (i.e., laptops). Throughout my week inside the booth, I was struck by the number of visitors who were seemingly unaware of our GoBOXX systems. This even happened as I carried one under my arm aboard the monorail in route to my hotel.  An inquisitive commuter recognized the BOXX name, yet was surprised to see it emblazoned on a laptop. He thought BOXX was solely dedicated to dedicated render farms. All in all, there was an incredibly high level of interest in our GoBOXX mobiles, and all were amazed by their CPU/GPU power. GoBOXX MXL, a true tower replacement featuring a desktop-class, 9th gen Intel Core i7 and NVIDIA Quadro GPU, demonstrated DaVinci Resolve, while the ultra-thin, VR-ready, GoBOXX SLM VR, featuring a new NVIDIA Quadro P4200 GPU, was also on hand.

Rounding out our hardware lineup was the APEXX W8R, a GPU-dense server specifically designed to accelerate GPU rendering. Featuring an Intel Xeon W processor and configurable with up to eight professional, dual-width NVIDIA® Quadro™ graphics cards, W8R brings maximum compute density to a single server (and when its chassis is open) a maximum horde of selfie-takers.

In a nod to our prescient 2017 MacSwitch marketing initiative, we entertained a record number of Mac users anxious to make the switch to BOXX. With no meaningful upgrades to the Mac Pro since 2012, we heard the dissatisfaction peppered with comments ranging from “getting out of Mac jail” to “ditching the trash can.” And no, we did not have one on hand to employ as an ash tray.

As a newcomer to the BOXX booth, I had a lot of great conversations with future BOXXers and learned that, for most of these content creators, hardware costs aren’t as much of an issue when compared to the amount of time our systems can save when rendering, color correcting, and conducting other workflow tasks. Time really is money. I also had the opportunity to meet some talented industry professionals who were enthusiastic BOXX champions, and gladly willing to provide us with meaningful content, case studies, and tradeshow placement. BOXXers are clearly sold on our products and remain fans for life.

Lastly, I would be remiss if I did not mention the contributions of booth guests Cirrascale Cloud Services and Pac Storage. Using a Teradici thin client to remote into a BOXX APEXX T4 workstation,