An excerpt from "Reviewing Two New BOXX Workstations", courtesy of Jon Peddie Research
Click here for the full article and to see the benchmarks.

One that bends the traditional design mold ... and another that shatters it 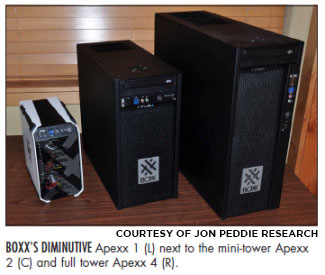 We’re not going to lie. Reviewing one workstation after another can get a bit tiresome. Machines can start looking an awful lot alike, but that’s rarely the case when we review a Boxx machine, and that goes twice this time around. The company sent us two of its newest workstations: the Apexx1 and Apexx 2. Both differentiate themselves from the typical workstation, one more modestly and one quite dramatically.

The conventional (sort of) Apexx 2.

Let’s start with the more conventional machine, although for Boxx, conventional is a relative term, as the company thrives by building products that the mainstream vendors typically aren’t building.

From the outside, the Apexx 2 doesn’t look a whole lot different, sharing the conventional convertible mini-tower (CMT) chassis; it’s on the inside where the mid-tier Apexx 2 workstation looks anything but common.

Most obvious is Boxx’s performance-focused calling card: the liquid-cooled CPU. Allowing the 4.0-GHz Core i7- 6700K to be clocked at 4.4 GHz delivers up to a 10% performance boost, which is going to have a noticeable effect for much of the single-thread code that throttles a lot of common professional applications, particularly in CAD. Beyond that we have a high-end Nvidia Quadro M5000 GPU with 16 GB of DDR4-2133 memory (this model can accommodate up to 64 GB).
Another premium performance touch comes with the Intel 800 GB SSD in a PCI Express slot. Paired with the recent advance of the NVMe software interface, the combination provides the highest performing storage system available in the industry today. Delivering the power to drive all these components is a 550-watt power supply unit (PSU), capable of 80 Plus Gold efficiency, which is quite reasonable for a machine of this class. 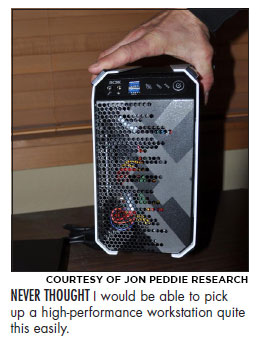 Even under heavy load, the Apexx 2’s modest-speed fans kept the noise level down to very tolerable limits (around 47.2 db, approximating the distance from under desk to ear location).

Finally, the Apexx 2 has a full range of connectivity options: the front panel sports the usual mic-in, audio-out mini-jacks, along with four USB ports, two 2.0 and two 3.0. The back offers a bit more than you might expect. With the attention to digital media and entertainment (DME) applications, Boxx throws in full 5.1 analog audio with an optical S/PDIF output to boot. In addition, USB is plentiful with another four USB 3.0 ports and two USB 3.1 ports. One of the 3.1 ports is available in the new, unifying Type C standard, something we’ll be seeing more of moving forward.

Every once in a while we see a machine that reflects not just modest incremental changes but a dramatic new take on what a workstation can be, and the Apexx 1 is one of those machines. Boxx took the market’s clear interest in Small Form Factor (SFF) workstations to heart, and created not only the smallest full-featured desktop workstation we’ve seen, it built in the premium performance that has become the company’s calling card. The extent to which the company was able to shrink a high-performance workstation is striking. The Apexx 1 chassis measures only 4.7 × 8.5 × 9.0 inches. 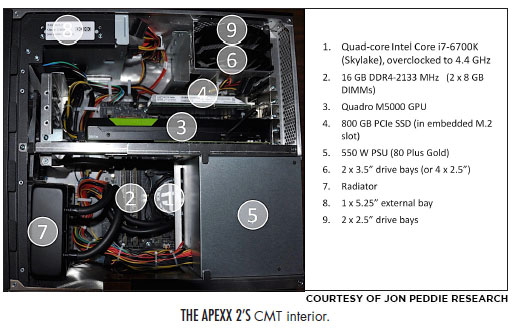 The dimensions alone are remarkable, but consider what Boxx was able to stuff in here: a set of components ranging from the mid-range (Quadro K1200 GPU and 16 GB memory) to the top end (Core i7 “Skylake” CPU, over-clocked to 4.4 GHz, and PCIe SSD). Not to take away from Boxx’s impressive efforts to shrink the form factor, it’s worth noting that Boxx chose an external power supply, similar to how a mobile PC or workstation is powered. However, one look and you can tell this is no mobile PC power brick. Measuring 8 × 4 × 2 inches, it’s almost as long as the Apexx 1 chassis, and nearly as heavy. Still, even factoring in the power brick, we’re talking an overall foot-print unlike anything we’ve never seen in a workstation, let alone one that legitimately fits the description of “high performance.”

Of course, the miniscule budget of internal space creates the daunting engineering challenge to fit in all the hard-ware to deliver the performance of a premium workstation. There will be tight limits as to what can be accom-plished in the thermal envelope of a chassis that small, simply as a function of airflow. But who says you have to cool with air alone? Not Boxx, which turned to a tool it’s used extensively in the past—liquid-cooling—to bend, if not break, those thermal limits. 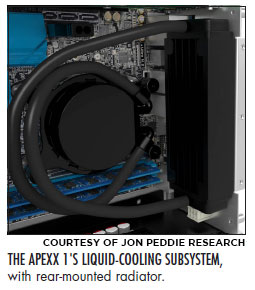 Liquid cooling is most commonly employed in high-end gaming machines, as a means to overclock the CPU and gain a competitive edge. However, the SFF workstation makes at least as compelling an application of liquid cooling, by side-stepping the tight thermal constraints imposed by the cramped chassis, hot chips, and limited airflow. As with most liquid-cooled approaches, liquid is pumped into a water block mounted on top of the CPU, where heat is conducted from chip to liquid. That liquid circulates out to a radiator positioned at the chassis air exhaust vent. Boxx adds a massive turbine inside that sucks air in and blows cool air through the radiator and out of the chassis. Of course, while liquid is more effective at transferring heat away from the CPU, the heat accumulating in the radiator still eventually needs to be transferred out of the chassis somehow. In this case, an integrated fan and cowl placed over the liquid block sucks air through the front grill and then exhausted out the back through the rear-mounted radiator. Despite thoughtful engineering, that fan and airflow create some noise.

With reasonably precise instrumentation (i.e., no acoustic chamber), we found that when under a heavy sustained workload (running SPECwpc benchmark), the Apexx 1 was about 3.5 db higher than the Apexx 2 (approximating the distance from the machine
under the desk to the ear). That doesn’t seem like a lot, but it does equate to roughly 25% to 30% louder as perceived by the human ear. But remember that the machine is only hitting that level under maximum load, which is unlikely to occur for extended periods of time in most workflows. One unavoidable compromise made in cramming so much hardware into such a little package is that expansion and upgrades are limited. Of course, few would find the desire to upgrade from a configuration like this. For example, our machine came with the Quadro K1200, the highest performing product from Nvidia that can fit and operate with reasonable performance limits. Removing the right panel (and rotating fan/cowl driving air through radiator) reveals little to add, remove, or upgrade, with the exception of access to two DIMM sockets. Our machine came configured with 16 GB of DDR4 memory (2x 8 GB DIMMs), while the model can support a max of 64 GB (2x 16).

Removing the left panel reveals two slim 2.5-inch SATA drive bays. Both of ours were empty, since our machine came configured with a 512-GB PCIe-based SSD in the M.2 form factor, recently adopted by all major workstation vendors. The PCIe interface, complemented by the recent, higher-performance NVMe software standard, allows bandwidth and latency to substantially exceed what SSDs can 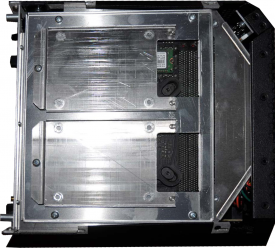 manage from the more common hard drive interface, SATA. Where SATA maxes out at 600 MB/second (peak rate), PCIe Gen2 (second generation) slots can provide between 1.0 and 2.0 GB/second, depending on whether the slot supports two or four PCIe lanes.
The backside of the Apexx 1 delivers enough of what you’d expect and need, including a plentiful assortment of USB ports (two 3.1, four 3.0, and two 2.0).
Boxx must have really gotten into the whole shrinking process, because it didn’t stop with the Apexx 1. Recognizing that the Apexx 1 will perhaps be most appealing in Digital Media and Entertainment (DME) spaces, Boxx took its RenderPro machine, typically configured for server rackmount config-urations, and shrunk it to Apexx 1 size. Piggybacking a RenderPro on an Apexx 1 gives studios the ability to model and animate interactively on the latter, while offloading final-frame rendering for maximum throughput on the former.

An excerpt from "Reviewing Two New BOXX Workstations", courtesy of Jon Peddie Research
Click here for the full article and to see the benchmarks.