Configuring the ideal workstation for your specific workflow can be daunting task. That’s why our in-house performance specialists are ready to take your call, providing expert advice and consultation. But if you’re more comfortable browsing our website and determining for yourself which BOXX solution is right for you, we’ve prepared this helpful guide.

The Processor – Cores and Threads vs Frequency

Did you know that there are, across our full line of BOXX workstations, approximately one hundred possible processor configurations? That’s a sizable amount to wade through, but aside from budget constraints, the selection process all boils down to one key feature—CPU cores, or more specifically, how fast and how many. Modern workstations feature a range from four to up to eighteen cores, and on top of those cores, many include hyper threading, which theoretically doubles the system’s ability to process threads (but does not double its performance.) In the simplest definition, threads are ordered sequences of instructions that tell a CPU what to do. You undoubtedly recognize speed as measured in GHz (1000 MHz), so understand that typically, lower core count CPUs run at a faster frequency while higher core count CPUs (running lots of threads) will operate at lower frequencies.

Deciding on what you need, beyond budgetary constraints, is actually quite easy based upon what you’re actually doing within your workflow.

Single-threaded activities like higher base frequencies, and in the left graph you’ll see that frequency decreases as thread count increases. Rendering and simulation activities scale linearly in performance because aggregate frequency matters, as show in the graph on the right. (click to enlarge image)

Getting the best of both worlds

“But wait,” you might ask, “what if I my workflow requires both higher frequencies for interactive activities AND high thread counts for rendering or simulation?” We’ve got you covered. The optimal workflow solution would be to combine our maximum frequency, overclocked APEXX 2 Model 2401 desktop workstation with a BOXX renderPRO, the only desk-side rendering and simulation solution that provides you with dedicated, dual Xeon processors that allow you to offload your rendering and simulation activities from your primary workstation so you can continue creating without waiting.

The graphics processing unit (GPU) is primarily responsible for what you see on your screen. GPUs come in all flavors from NVIDIA and AMD. They all include compute units like a CPU, albeit very different in function, as well as other engines and circuitry that set up polygons, create realistic lighting, and apply life-like textures to a 3D image. Many professional applications rely on the GPU instead of a CPU for computationally intensive tasks. Like the CPU, you can break down the type and number of GPUs by usage case.

NVIDIA has excellent recommendations for your workflow. Click on your application below for more information:

Don’t see your application? Our performance specialists are well versed in your workflow and can tailor a configuration that’s right for you. Below is a quick comparison chart outlining the specs of various NVIDIA and AMD professional cards. 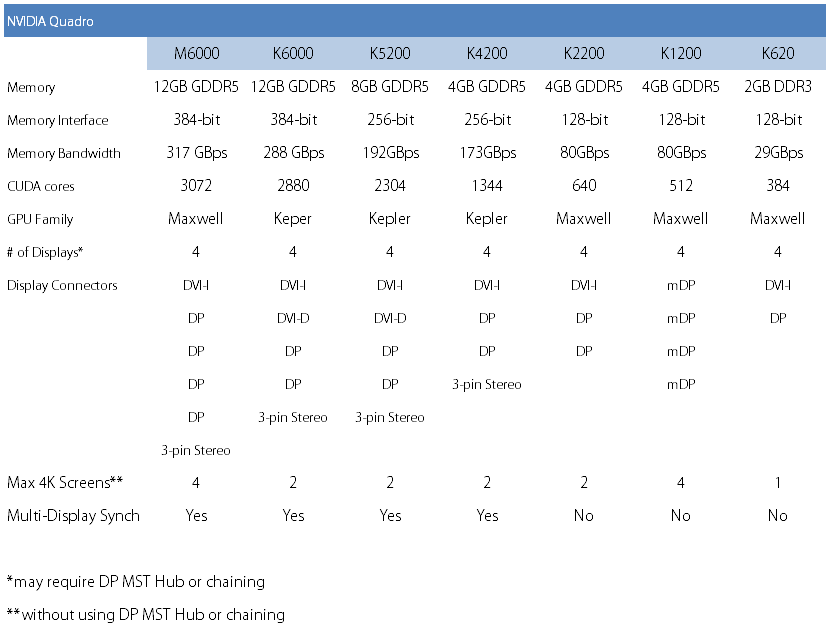 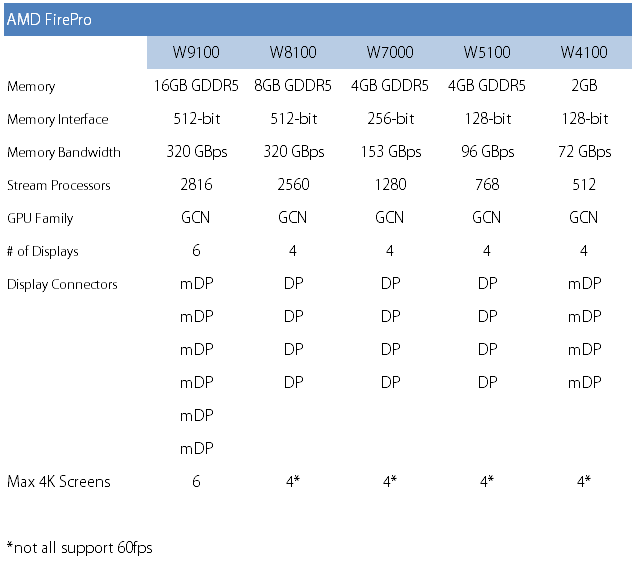 NVIDIA Quadro vs GeForce and AMD FirePro vs Radeon

NVIDIA and AMD design GPUs primarily for two markets: consumers and professionals. Oftentimes, their professional products are adapted from their consumer products and vice versa. While sometimes you can save money by buying a consumer grade GPU, it is not usually recommended for most cases. The primary reason to purchase a professional GPU would be its drivers. Drivers are the intermediary software that resides between your GPU, the operating system (OS), and the application you’re running. Quadro and FirePro drivers have been tested and certified to work with professional applications, while their consumer counterparts, GeForce and Radeon, have not. Uncertified drivers can lead to rendering errors and will negatively impact your workflow. Professional GPUs are also built to last, designed to operate 24/7 at peak workload without failure. They have stricter quality control and are made with better materials (capacitors, fans, etc.) In addition, they may include specialized features like GPU synchronization or exotic display outputs. However, at BOXXlabs, we’ve found that consumer GPUs can be used for rendering or simulation and that can save you money. We do encourage you to speak with one of our performance specialists to see if it is safe to run a consumer GPU within your workflow.

CPUs and GPUs always get the ticker-tape parades. Increases in processing power, however they may manifest, are always greeted with great fan-fare. We all like to see how much faster those high core-count CPUs crunch through tests like Cinebench, or how the latest pro graphics perform in tests like SPECview, but the unsung hero in system responsiveness is, and for quite a while now has been, the storage technology in a workstation. For years the mechanical hard drive ruled the consumer and professional PC market.

First introduced in 1956 as a way of permanently storing data for easy accessibility, the basic functionality has not changed; rapidly rotating disks or platters, coated by magnetic material, are paired with magnetic heads arranged on a moving actuator arm. These heads read and write data to the platter surfaces in a random-access manner, meaning that individual blocks of data can be stored or retrieved in any order rather than sequentially. While the basic functionality of these drives has largely unchanged in over a half century, the technology used to increase performance and storage size has evolved, all the while delivering smaller and more innovative form factors. From migrating from Parallel ATA (PATA) to Serial ATA (SATA), and introducing technologies like Native Command Queueing, onboard caching, faster on-board processing, to denser platters, increased spindle speeds, and even introducing exotic technologies like helium-filled drives and on-board NAND flash for caching, the mechanical hard drive still has inherent technological limitations that can be detrimental to your workflow. 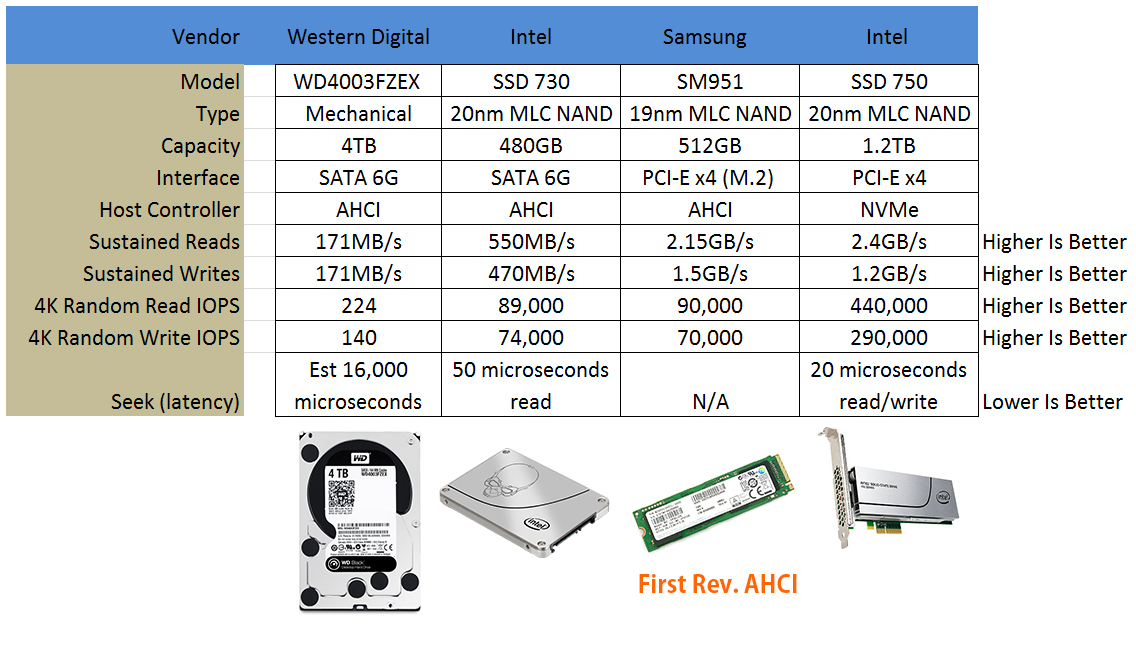 Note: The Samsung SM951 is now shipping as an NVMe drive, bringing it more inline with the Intel 750. This chart was created referencing the first revision of the drive that shipped in January 2015 with AHCI instead of NVMe. Additionally, not all M.2 PCI-E SSDs are shipping with NVMe technology, but the units that BOXX ships are NVMe equipped.

Don’t let the above chart overwhelm you. A few notes before we dissect these numbers: much of this data is supplied by the manufacturer, seek times for the Western Digital drive are estimated from reviews around the web, and were not available for the Samsung drive. The relevant information to begin discussing starts with the interface.

The first two drives, the WD 4TB mechanical and 480GB Intel SSD 730 are both SATA III, with a maximum theoretical ceiling of 600MB/s reads and writes. That 600MB/s ceiling is more than any mechanical drive can achieve, but has been completely saturated by SSDs for years. Given the overhead of the SATA bus, most SSDs top out a bit under that 600MB/s. Clearly, we needed a new interface. Which brings us to the Samsung SM951 and Intel SSD 750; these two drives interface directly to the PCI-Express bus, increasing maximum theoretical throughput from 600MB/s of SATA III all the way to 3.94GB/s of four lanes of PCI-E 3.0. Clearly we have some more headroom available to us, as even the Intel SSD 750 tops out at a 2.4GB/s theoretical read speed. The next number that should jump out at you is the IOPS, or Input/Output Operations Per Second. That number is heavily dependent on the seek times of a mechanical drive, which is embarrassingly low for even one of the fastest drives of its class, the Western Digital Black, while with SSDs it’s limited by the device’s internal controller and memory interface speeds. However, you may notice that the Intel SSD 750 has significantly higher IOPS than the Samsung SM951 (first revision) or Intel SSD 730. That’s because the Intel SSD 750 has migrated from the year 2004’s Advanced Host Controller Interface (AHCI) to the new Non-Volatile Memory Host Controller Interface (NVMe) which was designed specifically for accessing solid-state drivers through the PCI-Express bus. What’s the difference between these two? 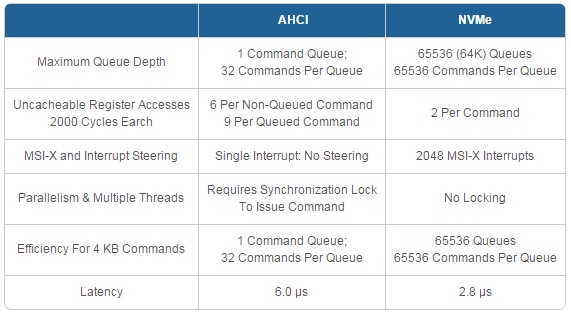 All geek-speak aside, you can see that NVMe brings the same type of performance increases to the table that moving from mechanical to SSD based storage does. This allows the Intel SSD 750 to out-perform the competition in certain workloads. And that’s the big question – what workloads benefit from these high performance drives? We can all safely assume that all SSD products will outperform mechanical drives in booting up a system, opening programs, and any other bandwidth-intensive application. In fact, we only recommend mechanical drives for storing and archiving data, and not for active projects. The real question we want to answer is the difference between a SATA SSD with AHCI, and the new Intel SSD 750 with NVMe technology. With that in mind, let’s dive into some benchmarks.

When it comes to memory, overkill is not necessarily a bad thing. And unfortunately, it’s hard to say exactly how much is optimal for your workflow. We recommend you open up your task manager and look at your RAM usage while you’re working. If you find that during your most intensive tasks you’re not coming within 30% of your maximum RAM amount, you’re probably in a safe range in regards to the amount of memory you need. However, more RAM means more room for multitasking, so having more RAM than necessary for a single application can be beneficial to your overall workflow. At a minimum, we recommend 16GB of RAM as a starting point, while large data sets for simulation, complex RAW file editing, large scenes with lots of polygons and textures in 3D applications, and lots of complex parts in engineering applications will all benefit from more RAM. All BOXX desktop workstations can be upgraded to their maximum RAM configuration at a later time in their lifecycle, so be sure to speak with our performance specialists as to your specific configuration’s upgradeability.

We offer two types of memory: DDR3 and DDR4. DDR4 memory is the latest iteration of memory technology, and it provides two immediate benefits to anyone looking to buy a custom workstation: bandwidth and module density. Bandwidth allows the CPU to do more calculations, faster, and module density means that you can fit more memory onto a physical stick of memory, allowing for more overall memory to be installed in a system. Currently, we offer DDR4 memory on the APEXX 2 Models 3201, 3401, and APEXX 4 Models 7201, 7401, and 7901.

Fill out the form below and BOXX performance specialist will get in touch with you to discuss your specific needs or call 1-877-877-2699.