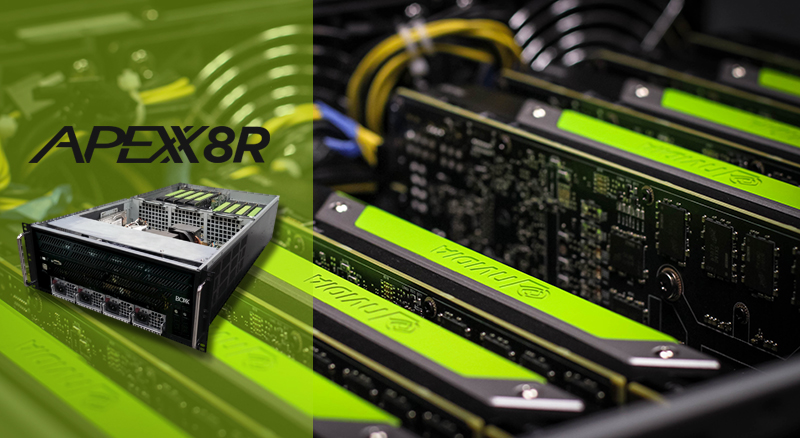 BOXX got its start building high-end workstations and render nodes for the visual effects industry. It’s in our blood. It’s what we do and we do it well. As many of you know, the available options for quality rendering engines continues to grow. New features and optimizations can help mitigate the demands of today's demanding pipelines, but how do you cope with the ever increasing shot complexity that leads to unacceptably long render times?

In this article, we’ll take a look at the BOXX APEXX 8R and how GPU-accelerated rendering can drastically accelerate look development, increase refinement iterations and help you build more compelling visuals. Additionally, we'll look at different use cases for the system and discuss performance benchmarks.

Why so many GPUs per render node?

In the past, we've written about how well the performance of GPU rendering scales as you add more cards. Essentially, there is little to no performance penalty for using as many GPUs as needed in your pipeline. One thing to consider, however is the license cost and the GPU density of your servers. Let's say, for example, that you've run all your benchmarks and know you need eight GPUs to satisfy shot requirements and meet typical deadlines. Since render engines typically charge per node, it makes sense to pack as many GPUs in a system as possible in order to avoid unnecessary licensing costs. This is even more noticeable in larger GPU render farms. 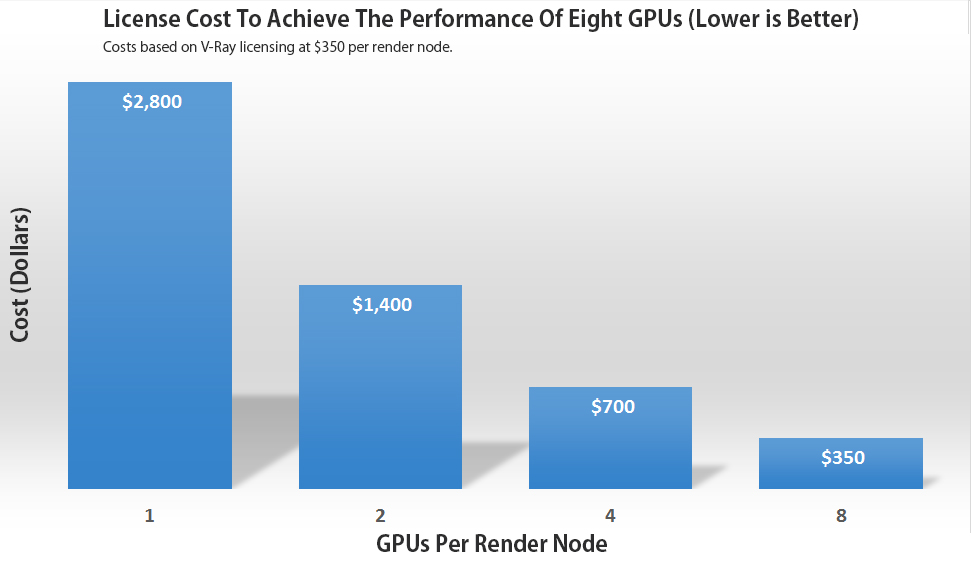 GPU-dense servers also save on physical space and cooling expenses by placing more compute capability in a smaller footprint.

How Fast is It?

In terms of price and performance, GPU rendering can be a very attractive option for many organizations. But keep in mind that there are some advantages and disadvantages (dictated by your workflow) associated with the aforementioned solutions. Regarding GPU rendering, remember that your 3D models and all associated assets need to fit within the GPU's memory. GeForce cards, while very fast, are currently limited to 12GB of RAM. For some, this is a non-issue, but for those visualizing massive CAD models or VFX scenes with thousands of high-res textures, GeForce may not be an option. In that case, Pascal Quadro GPUs with up to 24GB of memory would be the ideal solution.
Of course, some pipelines simply cannot operate within the memory constraints of the GPU for final frame rendering and will continue to rely on traditional CPU-based rendering solutions.

Who can benefit from this machine?

The APEXX 8R can accelerate a variety of visualization pipelines equipped to utilize GPU acceleration. From architecture and product design, to virtual reality, look development, and visual effects for film, GPU rendering is a powerful and cost effective rendering solution.

Prices referenced above are estimates and subject to change. Call a BOXX performance specialist for more information.