The latest SolidWorks has a little something for everybody, but mostly CEO Gian Paolo Bassi works hard to keep everyone happy. 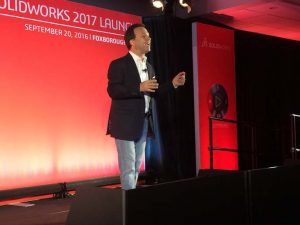 Dassault Systèmes rolled out the latest version of SolidWorks with a live stream and event for users, press, and analysts. Clued-in users were not surprised by much in the announcement, since SolidWorks has been walking their base through the changes to come for some time. In general CAD users hate big surprises.

But, whether they like it or not big waves of change have been transforming the CAD industry for the last five years. And, during times of change loyalties may shift. The users are up for grabs especially because CAD is becoming integrated into production and encompasses more functions than ever before. If the CAD model is to truly be the digital twin of the products it is describing, it has to have information about all aspects of the design.

SolidWorks claims more than 3.1 million users, which includes education. Dassault Systèmes is also claiming around 3 million registered users for its DraftSight drafting tool, which they now say is getting a user base of its own and not just as an alternative to AutoCAD.
​
As for SolidWorks itself, the company has, as always, focused on usability with more little tweaks to features like context-aware tool tips, improvements to breadcrumbs, and alerts for problems in the models that highlight the actual problem so users can go straight in and fix it. It has enhanced support for large assemblies, magnetic mates and improved tools for chamfers, fillets, and holes.

Read the Full Article at gfxspeak.com