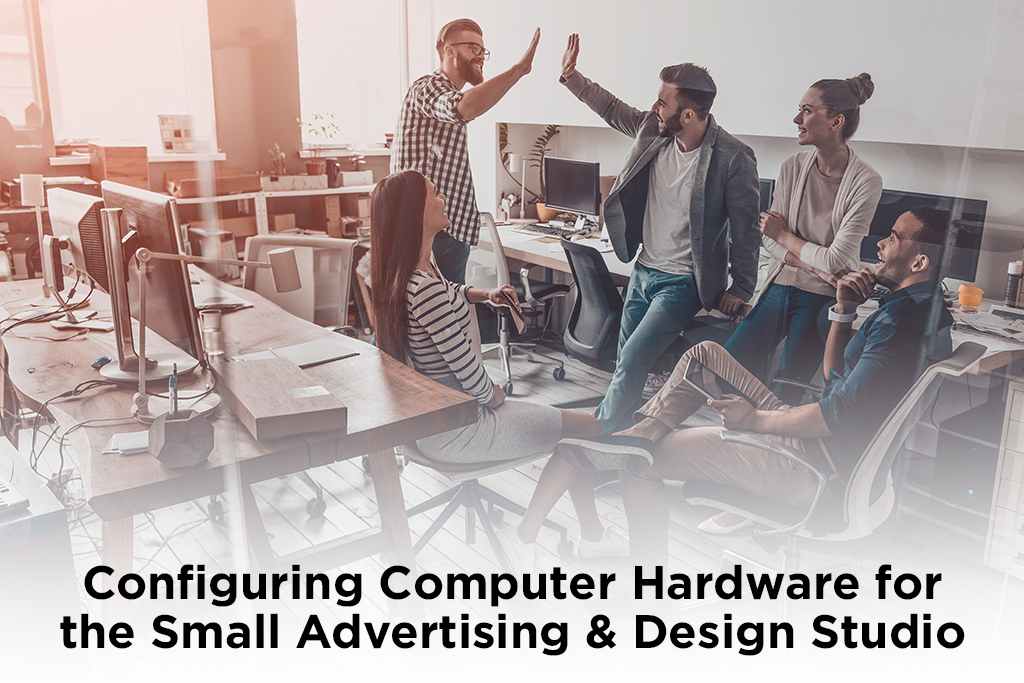 Advertising is big business in the United States. In fact more money is spent on advertising in America than anywhere else in the world—to the tune of over $200 billion dollars per year. Of course, when you mention advertising, most people conjure images of Mad Men, television commercials, colossal ad buys on Super Bowl Sunday, and multinational ad agencies. Often overlooked is the work of smaller agencies and design studios who daily crank out logos, local ads, digital media, and other creative assets for a broad range of clients. For these smaller players, who often do work for some pretty heavy hitters and log taxing hours to meet impossible deadlines, selecting the proper computer hardware is essential.

Eric Fischer, designer and founder of goFish Advertising, relies on Adobe Photoshop, Illustrator, and InDesign. He starts with 32GB of RAM since it’s not uncommon to have all three programs open at once and to be constantly saving files like stock photos. He also works frequently in Adobe Animate, since a number of goFish clients require HTML 5 animated banners. Fischer stresses the importance of RAM for frequent (and often large file) Dropbox uploads. An SSD is also recommended since RAW files create a large RAM footprint and the opening and saving of projects is accelerated by the speed delivered with an SSD. Lastly, he reminds us that you should never skimp on that high speed internet connection. Outside the office and away from his desktop tower, the addition of a laptop allows Fischer to send file iterations from wherever he may be, including home.

Rod Richburg, the founder of RSD Advertising, recalls when he first started designing on computers decades ago, and says modern design applications, coupled with the size and complexity of files, makes the entire process so much more demanding in today's world. Without a powerful workstation, he says, the creative process is severely hampered and the ability to make deadlines nearly impossible.

Richburg recommends at least 32GB of RAM and a professional graphics card from NVIDIA or AMD which will provide the OpenCL accelerating used in various filters. Even a basic Quadro or FirePro can suit design firm needs, unless a designer needs exotic display support for higher resolutions or maximum display arrays.

In addition to GPU performance, when Richburg configures a new workstation for one of his designers, the emphasis is also on processor speed. “Of course, you can argue that it’s a Catch-22 when billing by the hour,” he laughs, “but you make the client happy when you make that deadline—and the advertising world is a deadline-driven world.”

BOXX has a full line of workstations purpose-built for graphic design workflows including the ultra-compact APEXX S1 and best-selling APEXX S3, as well as GoBOXX mobile workstations.