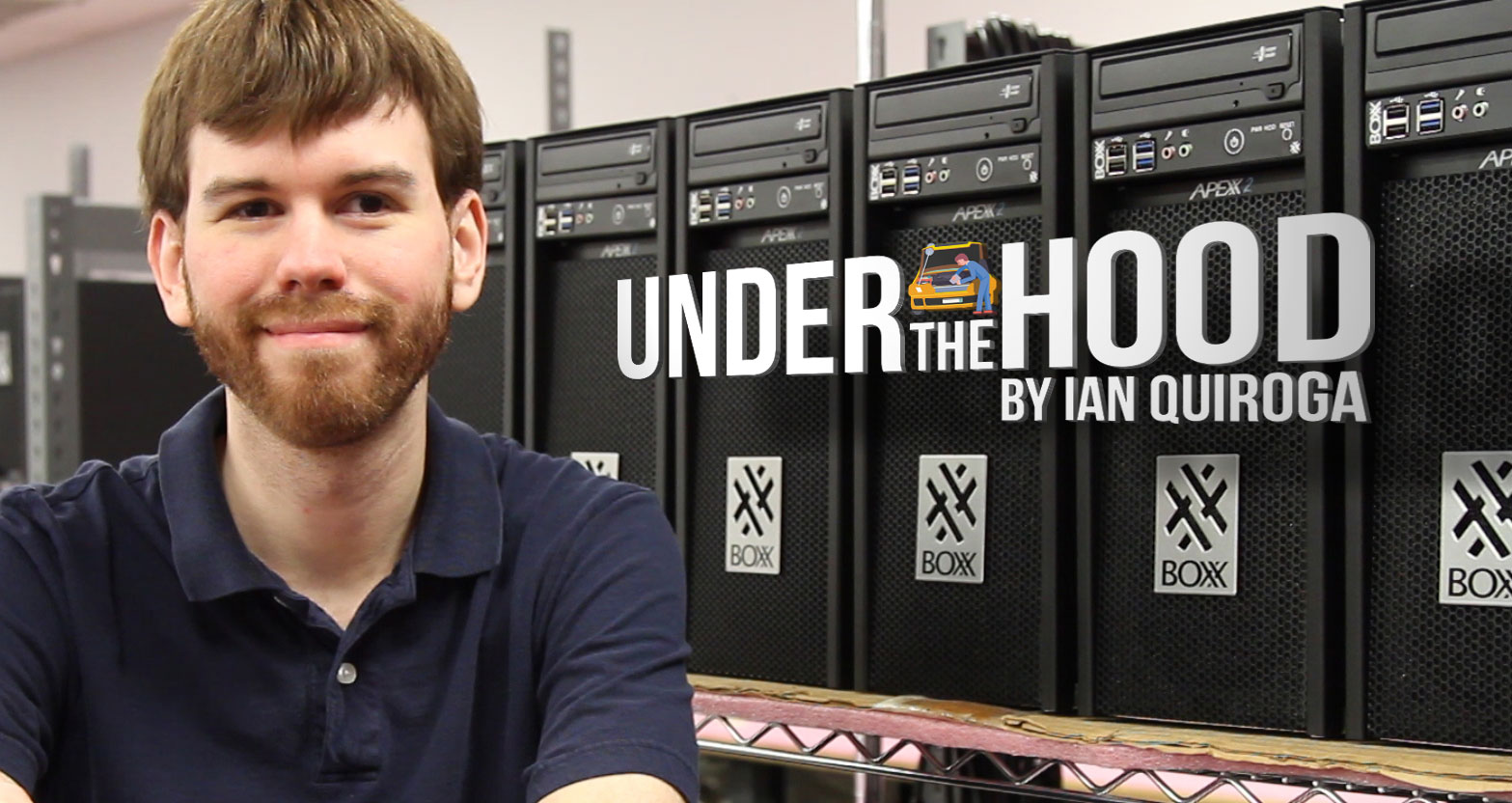 Specialization is For Insects

There are some things about BOXX I think you should know. I wouldn’t call them secrets, but in a way they are hidden. It’s not the kind of thing you get from a typical marketing email or blog post. I’m here to talk about the little stuff—the interesting details that come together to make every BOXX system what it is. And, as it happens, one of those little details is me.

I’m an assembler at BOXX Technologies. I’ve been building systems here since 2012, I’ve seen the models come and go, and I've built them all. Updated, tweaked, revised or refreshed, each time they get better and better. Not just the technology, mind you, but the systems themselves. Alongside the rapidly-advancing motherboards, processors, RAM, and video cards are chassis designed by BOXX engineers right here in Austin, Texas. In an industry that changes so rapidly, you must be able to adjust as quickly. If you can adjust even more quickly, even better.

But it isn’t just about keeping up with technology. It’s also about being the only hardware company offering specific solutions to specific problems—for example, the brand-new Pro VDI 8401R-V, which happens to be the world’s first overclocked system designed for VDI power users[1]. No longer will your VDI solution running CAD for multiple users feel graphically inadequate. Allow those ten cores running at up to 4.3 GHz to set you free. That’s the kind of thing I’d write if I were in marketing, anyway.

So why is an assembler writing this? Well, it just so happens that I’m a writer with a BA in English from the University of North Texas and, upon graduating, soon discovered what I liked to do in my spare time—building computers—was suddenly my real job. Now I’ve managed to shoehorn my other hobby—using my degree—into that job as well.

Speaking of which, I think that’s something unique about BOXX. Like most places, everyone here is capable of doing more than just one thing, but the great part is we’re actually encouraged to do more. Talent doesn’t appreciate being boxed in[2], and BOXX doesn’t appreciate it either. Like a great man[3] once said: “Specialization is for insects.” It’s nice to work somewhere with the foresight and the flexibility that accommodates that way of thinking. I suppose that’s why most people I work with have been here even longer than I have.

Like I said before, this is about details, and I hope to provide many more to come, but here’s a simple one to start with. We sell APEXX 1, 2, 4, and 5 workstations, right? Why no APEXX 3? There’s actually a good answer: the number refers to the total amount of double-wide video cards that can fit into each chassis[4], and designing a chassis that can hold three cards just didn’t seem to make sense. I worked here a full year before I caught on to that one.

Now I could just go on about stuff like our new overclocked Pro VDI solution (a world-first; did I mention that?), or our new GoBOXX MXL VR that’s perfect for the Oculus Rift, or I could even mention that we recently had the best quarter in the entire history of the company—but that’s not really what I’m here to write about.

What I seek to accomplish with these posts is to offer some insight into the assembly process from an actual assembler, to give those who are curious a chance to know what it’s like to build a BOXX, and to know more about what it takes to get a BOXX system to you. Also, I’ll provide random details about the company that I, as a relatively sane person, find interesting. So, don’t turn that dial, even though that’s not a thing anymore. Don’t swipe that screen? Something like that.

[1] The “R” because it’s rack-mountable, and the “V” is for virtualization. And the numbers are meaningless. I mean, not really, but that’s for another time. Isn’t context fun?
[2] I’m sorry.
[3] Science-fiction writer and uncredited inventor of the waterbed Robert Heinlein (1907–1988).
[4] Except for the APEXX 1, which can only fit one single-width, low-profile card. But they’re working on the low-profile part. Also, the APEXX 5 can actually fit an additional sixth single-width card if you really wanted to get fancy with it.

About Ian Quiroga
Ian, an Assembler at BOXX Technologies, holds a BA in English from the University of North Texas. In his spare time, he enjoys watching movies, playing guitar, and writering goodly.