Do you need NVIDIA Maximus for GPU Rendering?

In the past few years, many 3D artists have begun to take advantage of GPUs in their workflow. Renderers like V-Ray RT, iray, Octane, and others offer the ability to accelerate the rendering process by offloading the ray tracing calculations to the GPU. In addition to rendering, the GPU also plays a role in other areas of the pipeline like fluid and particle simulation. In this article, we'll take a look at how 3D artists are using GPUs in their workflow and discuss the potential benefits of NVIDIA's 2nd generation Maximus technology.

Frequent disruption in creative momentum can prevent you from realizing the artistic intent of your project. An example of this disruption in the past was the familiar create-render-revise approach.

GPUs brought the promise of shortening this delay between iterations. Tasks like tweaking shader properties, lighting conditions and particle parameters could constantly be evaluated without having to generate dozens of test renders.

Realtime visual feedback was suddenly possible. As the GPU became more widely used for this purpose, artists quickly began to demand more out of them. To take full advantage of a GPU accelerated 3D workflow today, you need a multi-GPU workstation for a few reasons. For example, the performance of these renderers and plugins often scale very nicely as you add more GPUs.

NVIDIA refers to this concept as "speed of thought creativity" and points to their Maximus technology as the key to its success.

Another reason to opt for a multi-GPU system is to maintain a high level of viewport interaction with your scene. The utility of an interactive GPU renderer can be diminished by sluggish viewport frame rates. In some cases this is caused by having a single GPU drive both the compute (rendering) as well as the display (viewport performance).

Many users are still confused on the benefits of configuring your workstation for Maximus. Simply put, it allows you to take full advantage of multi-GPU systems in certain situations.

The technology requires a combination of NVIDIA's professional Quadro and Tesla cards which are enabled by their Unity driver. These cards can be cost prohibitive for some and many will likely steer away from them due to cost alone. After all, it’s no secret that the much more affordable GTX cards are quite capable at rendering.

We asked Eugene Kwak of NVIDIA to take us a little more in depth on the benefits of a Maximus workstation.

BOXX: Given the widespread use of GTX cards for rendering, what tangible performance benefits could a user expect in a Maximus configuration over a GTX configuration?

Eugene: While GTX cards certainly are excellent and offer great performance, Maximus, which is based on the professional lineup of cards (Quadro + Tesla) offer additional confidence through certifications with ISVs. This ensures that the hardware and software are optimized to run reliably and as fast as possible. GTX cards do not offer this benefit.

BOXX: If a 3D artist feels that the work they do isn’t mission critical, can you elaborate on what they might be missing if they opt for a GTX configuration instead of Maximus?

Eugene: Maximus is not just about mission critical tasks - It’s also about having the support of the application vendors to ensure that any updates to the application are fully realized in the Maximus configuration. Additionally, with more applications in the Media and Entertainment space supporting multi GPU applications, the benefits of Maximus will continue to grow while still maintaining a high level of reliability and support.

BOXX: Can you elaborate on the Unity driver and how it makes Maximus more efficient at assigning GPU tasks?

Eugene: The unified driver used in Maximus is quite intelligent and ensures that resources are allocated properly to make use of the powerful GPUs you have on hand. In addition, with the latest drivers, the Maximus Configuration Utility gives you the flexibility to turn Error Correcting Code (ECC) mode on and off depending on how critical your application is. You are also given the option to allocate more of your Quadro resources to assist in computations alongside the Tesla card. The ability to view your GPU usage on your Maximus system is provided as well.

BOXX: Can you identify any other benefits a user could expect when using a Maximus configuration that aren’t covered above?

Eugene: Maximus represents the future for workstations. More and more applications require serious horse-power while being super reliable. NVIDIA Maximus is a combination of boards which are all assembled at NVIDIA to exacting specifications and standards. In addition, ISVs have taken note of the benefits of multi GPU systems and are optimizing their applications to run these configurations. Multi-GPU systems will become a lot more commonplace in the near future.

Take a look at the following video demonstrating V-Ray RT for Autodesk Maya on a Maximus configuration.

NVIDIA’s stance is that each GPU task in your workflow needs to be paired with a GPU that was designed to perform that task (Quadros for visualization and Tesla for compute)
Since the Tesla is a coprocessor and designed for computation only, there is no way it can it can take a performance hit by wasting resources on visualization - a process the Unity driver optimizes with intelligent GPU job allocation.

NVIDIA also works with several leading software companies to certify and optimize their Quadro and Tesla cards for peak performance. Should you run into an issue on a Maximus rig, there is the added benefit of professional technical support directly from their engineers. GTX cards are not professionally supported by NVIDIA or by BOXX Technologies. 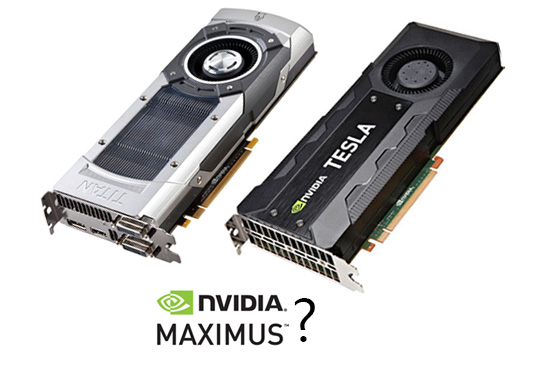 Since the inception of GPU rendering, artists have been using GTX cards. They are much more cost effective and relatively fast compared to Quadro and Tesla. So why not just go with a multi GTX configuration and specify though your software which cards to use for compute? The answer: it depends on what you’re trying to accomplish.

Your application may not allow you to specify (though most do) or you might want to multitask with more than one GPU accelerated application open. 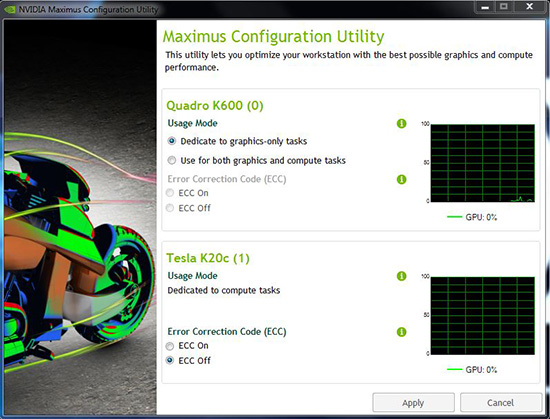 Another reason could be that your workflow requires constant interaction and iteration of your models in your application viewport while simultaneously getting feedback from your GPU renderer (a mission critical creative workflow). If you have tried a GTX configuration and are experiencing sluggish performance, a Maximus optimized workstation could be the solution in this case.

Ultimately there are many factors that can be applied to a pros/cons discussion on “professional” cards vs. "gaming" cards. In terms of raw rendering speed, the card with the most CUDA cores will win. Currently there is a tie at the high end where the GTX Titan and the Tesla K20X both have 2688 cores.

Cores are a big factor but certainly not the only feature you should consider.

The amount of memory on the GPU is a deciding factor for many since your entire 3D scene and all of its assets (textures, proxy files, etc.) have to fit on the GPU. The Titan is the exception among GTX cards with 6GB of memory. "Lower end" GTX cards have significantly less memory.

Other factors include the improved reliability/stability of Quadro and Tesla cards compared to GTX, whose technology is licensed by NVIDIA and built by numerous 3rd party manufacturers.

At BOXX, Our highest priority is building and configuring the ideal workstation for your workflow and the applications you use.

If all you need is raw GPU rendering power at low cost, then you should go with a GTX-based system.

If you deal with high poly scenes that require rapid design iteration and interaction in an environment where performance and reliability are paramount, then a Maximus configuration is likely the best choice.

BOXX Technologies is uniquely suited to build you the most reliable GPU workstations you can buy. By working with partners like NVIDIA along with our dedicated engineering and support team, you can be certain that the BOXX you buy is the optimal solution for your workflow and budget.