Supercomputing 2018 (SC18) marked the 30th anniversary of the annual international conference of high performance computing, networking, storage & analysis and it drew a record-breaking 13,000 attendees.
At SC18, BOXX partnered with AMD to unveil the GX8M server based upon Radeon Instinct MI60 accelerator cards designed for next-generation deep learning, HPC, cloud computing, and rendering applications. These AMD cards are the world's first 7nm data center GPUs and are aimed at business and enterprise sectors. This EPYC-based platform provides up to 32 cores, over 2TB memory capacity, and 128 PCIe lanes, allowing it to handle HPC workloads with over 16 simultaneous threads per schedulable task or process.

The accelerators feature two Infinity Fabric Links per GPU which deliver up to 200 GB/s of peer-to-peer bandwidth for communications up to 6X faster than PCIe Gen 3 interconnect speeds. They are also the first GPUs capable of supporting next-generation PCIe 4.0 interconnect, which is up to 2X faster than other x86 CPU-to-GPU interconnect technologies.
Analyst Patrick Moorhead, founder of Moor Insights & Strategy, said that with Radeon Instinct's 7nm design, "AMD moved the ball down the field from a hardware perspective." Moorhead added, "I am impressed with its 1TB memory bandwidth, ganging with EPYC and Infinity Fabric, and density." The BOXX/AMD GX8M rackmount server received the highest recognition at the show as AMD was named one of the top vendors to watch in 2018.

The BOXX/AMD GX8M is expected to ship to data center customers by Q1 of 2019. 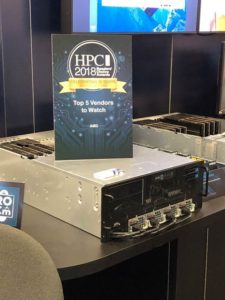 BOXX also partnered with Xilinx, Inc. (a leader in adaptive and intelligent computing) to demonstrate the first rackmount server solution, our GX8M, featuring Xilinx Alveo U250 accelerator cards. This system is now available from BOXX to accelerate key HPC and other workloads. The Alveo portfolio of powerful accelerator cards is designed to dramatically increase performance in industry-standard servers across cloud and on-premise data centers.

The new BOXX/Xilinx GX8M is garnering tremendous interest from customers and was the hottest topic at this year’s Oct. 2 Xilinx Developer Forum. At the show, it was revealed that BOXX, AMD, and Xilinx have been jointly working to connect AMD EPYC CPUs and the new Xilinx Alveo line of acceleration cards for high-performance, real-time AI inference processing. To back it up, the companies revealed a world-record 30,000 images per-second inference throughput!

At BOXX, we know the optimal performance criteria of your CPUs and GPUs and provide the ideal cooling solution to match your design requirements. When your software applications call for lightning-fast CPUs and GPUs, we tailor our purpose-built workstations to meet those unique needs, whether its matching Intel® Xeon® or AMD EPYC CPUs, NVIDIA Tesla V100 and AMD Radeon Pro GPUs, or clock speed management and proprietary cooling. BOXX custom hardware configurations allow you to focus on your work, while we take care of the rest, i.e., state-of-the-art performance.

We look forward to seeing y’all in Denver at SC2019!