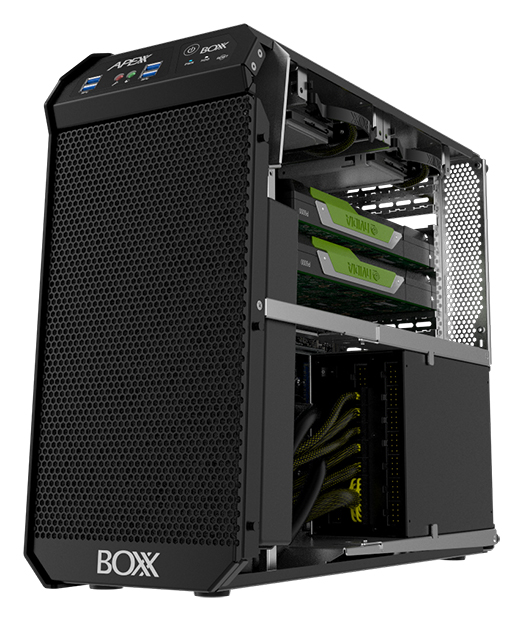 With an overclocked six core 'Coffee Lake' Core i7 CPU and a well engineered compact chassis, this is an impressive CAD workstation but it does come at a premium.

When we started DEVELOP3D in 2008, almost all CAD workstations came with a quad core CPU. If you wanted more cores, say to cut render times, you needed a specialist CPU and deeper pockets. You also had to accept that performance in single threaded applications like CAD would fall, due to a drop in GHz.

Ten years later and things have finally changed. The new Intel 'Coffee Lake' Core i7-8700K is the first mainstream Intel processor to feature six cores. And despite having 50% more than its predecessor, the 'Kaby Lake' Core i7-7700K, it should also deliver a small performance improvement in CAD.

The Core i7-8700K has a base frequency of 3. 7G Hz, at which all six cores can run, but is designed to Turbo up to 4.7GHz in lightly threaded workflows. This is a much wider frequency range than the 'Kaby Lake quad core i7-7700K (4.2GHz- 4.5GHz) but becomes irrelevant in the APEXX S3, the latest workstation from custom system builder BOXX.

BOXX has overclocked the Core i7-8700K so all six HyperThreaded cores run at 4.8GHz, all of the time. This makes a big difference in CPU rendering applications.

The APEXX S3 completed our Luxion KeyShot render test 38% faster than the overclocked 4.6GHz Core i7-7700K Scan 3XS workstation we reviewed in March. Previously, in order to get this level of rendering performance, you had to go for a specialist overclocked Intel CPU with 8 cores or more, which was significantly more expensive and has a lower clock speed.

This is a welcome boost to CAD users who rely on rendering as a key part of their workflow. The emphasis on CAD is important here, as this where the APEXX S3 excels. Indeed, it set a new record in our SolidWorks IGES export test, which uses a single CPU core to process the parts in a complex CAD assembly.

Our test machine was kitted out with 32GB DDR4-2666MHz memory, which should be a match for very complex CAD models. But if you frequently use multiple applications as part of your product development workflow, then it can go up to 64GB, distributed across 8 DIMMs.

In order to push the Core i7-8700K beyond its stock clock speed, BOXX has used an enterprise-class closed loop water cooling solution which connects via a flexible pipe to a large radiator at the front of the machine, cooled by two fans.

With air drawn in at the front and expelled at the rear of the machine, this does mean some of the heat extracted from the CPU is pushed back into the chassis. However, while fan noise was noticeable, we found it to be perfectly acceptable throughout all of our testing - although the RPM of the fans cycled up and down every 10 seconds or so during our KeyShot renders which some might find annoying (this didn't happen in V-Ray or SolidWorks Photo View 360 where it was consistent).

The chassis is nicely designed with an angled I/0 panel front and top giving easy access to four USB 3.1 ports (there are also four USB 3.1 and two USB 3.0 at the rear). This leaves the entire front fade free for uninterrupted air flow. To stop dust getting in there is a removable air filter.

The chassis is custom made in Texas from aircraft grade aluminum. I'm no aerospace engineer, but it's obvious that it has a strength and rigidity beyond that of off-the-shelf cases. It's also notably smaller than many of the expandable overclocked machines we review at DEVELOP3D.

One of the reasons for this is that BOXX has put two 3.5-inch drive bays at the top of the chassis instead of the front. There is also no optical drive. Our test machine came with a single 512GB Samsung SSD 960 Pro, one of best workstation class M.2 NVMe SSDs on the market. It is housed directly on the AS Rock Z370 Taichi motherboard, which also has two additional M.2 slots, so there are plenty of storage options.
Graphics in our test machine was provided by a single Nvidia Quadro P2000 GPU, an excellent choice for 3D CAD. The APEXX S3 managed to smoothly navigate every SolidWorks and PTC Creo model we threw at it at FHD resolution, even with real-time lighting, shadows and reflections enabled.

We started to see the limitations of the CAD-focused GPU in game engine design viz application LumenRT where frame rates dropped to 13.5 FPS with one dataset. This will only get slower at 4K resolutions, so those who take their real-time visualization more seriously, or want to take their designs into VR, should consider a Quadro P4000 (which we also tested) or even a Quadro PS000, Quadro P6000 or AMD Radeon Pro WX 9100.
The APEXX S3 can actually accommodate up to three GPUs (two double slots, one single slot) thanks to its 650W PSU so there are plenty of options for those using multi-GPU aware applications like Autodesk VRED or GPU renderers like V-Ray RT, Solid Works Visualize or Radeon Pro Render.

Overall, the APEXX S3 is a very impressive high-performance CAD workstation that is built around a solid, well-engineered chassis. There is a downside though. Quality like this comes at a premium and our review machine will set you back £2,899 (with a Quadro P2000) and £3,299 (with a Quadro P4000). This is notably more than a similarly specced machine from other custom workstation manufacturers in the UK. BOXX justifies this price tag not only by the quality of its machines but also by the quality of its tech support, which in the past we have found to be very knowledgeable in a number of CAD and rendering applications. There are many BOXX customers that feel this is a price worth paying.