How to Configure Your SOLIDWORKS Workstation

If you’re in the market for a SOLIDWORKS workstation, you should begin by asking three basic questions about your workflow:

1. How big are my assemblies?

2. How many geometric surfaces do I have?

3. How complex are my parts files?

> Based upon your responses, you can begin to formulate a plan.

Selecting the number of processing cores in your workstation is critical. SOLIDWORKS is a frequency bound application (meaning that it predominantly uses only one core). Since the frequency of that core determines performance more than any other variable, a workstation with less cores (but higher frequency) is ideal. If you’re running only SOLIDWORKS and absolutely nothing else, you could actually get by with as little as two cores. But realistically, since you have an OS, you’ll need two cores dedicated to the OS and two to run SOLIDWORKS.

“You can buy more cores, but why?” says Adrian Fanjoy, MCSE, the Technical Service Director for Computer Aided Technology, Inc. (CATI). Fanjoy, along with CATI Support Manager Josh Altergott are a pair of SOLIDWORKS gurus responsible for “Achieving Extreme SOLIDWORKS Performance: Hardware/Configuration” and “Achieving Extreme SOLIDWORKS Performance: Modeling Methodology presented at SOLIDWORKS World 2015. For these expects, when the subject is configuring the correct SoildWorks platform both agree that, “When looking at cores it becomes a money issue and you’ll never use them (additional cores) anyway.” As an example, Fanjoy cites a pair of workstations from a top tier manufacturer that are virtually identical in configuration except for the fact that one is a single processor and the other a dual. “The dual processor model is over $800 more,” he says, “$800 more for cores many CAD designers won’t be using. That’s when it goes from being a performance issue to an ROI one.”

The Need For Speed?

Photoview360 and SOLIDWORKS Simulation are bandwidth bound (meaning they commonly utilize multiple cores simultaneously). Therefore, if you incorporate these applications into your SOLIDWORKS workflow, a workstation with more cores can provide better performance to complete your renderings or simulations faster. In this case, an eight core single processor is generally the best solution since the more processors you have, the faster a given task is completed. Would adding an additional processor (and therefore more cores) be beneficial? According to the CATI experts, it can, but only if your world revolves around renderings or Simulation.

“Overclocking matters,” says Fanjoy. “It allows you to take hardware and give it a boost. Everything runs faster. Rebuilds (in SOLIDWORKS) are noticeably faster.” Referring to their own testing of SOLIDWORKS on an overclocked BOXX workstation, the two experts noted that overclocking offered significant performance increases. BOXX is the only workstation manufacturer to offer overclocked systems with full Intel® warranties.

The top of the line workstations produced by other manufacturers (including tier one companies) are capable of speeds as high as 3.7 GHz, yet that number has been the threshold since 2006. “It’s the frequency plateau,” says BOXX’s VP of Engineering and avid SOLIDWORKS user Tim Lawrence. “Improvements to architecture have helped somewhat, but not enough. With processor speeds remaining virtually stagnant for years, overclocking is the only way to significantly increase core speed and thus, performance.”

And Fanjoy insists that overclocking is also part of a much larger picture. “Because all processes are moving faster,” he says, “working becomes more efficient, you’re more productive, and it’s a better overall user experience.” With clock speeds up to 4.5 GHz, BOXX APEXX workstations are the fastest workstations on the market for SOLIDWORKS users.

APEXX 2 3402: For the SOLIDWORKS user who also works occasionally with Photoview 360 or Simulation, BOXX recommends APEXX 2. This liquid-cooled workstation, powered by an overclocked, Intel®  Core™ i7 processor running at 4.125GHz, is the industry’s fastest single socket, eight-core workstation.

renderPRO: Free your workstation and maintain peak productivity by offloading multi-threaded, CPU intense tasks to renderPRO. For SOLIDWORKS users who need to rapidly render models in Photoview 360 or Keyshot, this is the ideal  solution. Available with up to 24 CPU cores, renderPRO easily handles the most demanding simulation or rendering.

“RAM is the lynchpin,” say CATI experts, when the subject is configuring the correct SOLIDWORKS platform, a sufficient amount of RAM is critical. “You need enough RAM so you don’t have to swap or borrow from the hard drive i.e., the virtual memory”. According to them, the “unlimited” RAM available with the 64 bit platform is the single best thing to happen in the world of 3D CAD. So in an ideal world, a user could buy a massive amount of RAM, install it in his machine, pull up the largest, most difficult assembly and test to determine if the system could handle it. However, in the real world we know it doesn’t work that way. If you’re in the process of configuring or purchasing additional RAM, take a good look at what you’re currently using. You should begin with at least 16 gigs. Is your system responsive? Does it execute tasks quickly? If not, you may need to increase your RAM.

When engineers and CAD designers set out to configure the ideal SOLIDWORKS system, the area that seems to cause the most confusion (due primarily to a wealth of misinformation) is the graphics card or GPU. “The biggest misconception is that a bigger GPU is always the way to go,” says Altergott, “but that is simply not the case.” At larger companies or engineering firms, the confusion is an unfortunate byproduct of the relationship between the SOLIDWORKS user and IT personnel. A CAD designer may find themselves in a situation where he or she is forced to rely on an inadequate workstation which causes SOLIDWORKS to run slowly, or the rendering and simulation processes to take hours. The user then pleads their case to management, who hands it off to IT, and in this instance, that is often where wrong decisions are made. “In some cases,” says Fanjoy, “the IT department, in order to get the SOLIDWORKS engineer off of their backs, will purchase the biggest, baddest sys-tem on the market—but it’s unnecessary. An NVIDIA Quadro K600 card will work absolutely fine in many workflows. Now, you can opt for the NVIDIA Quadro K2200, K4200, or even a K5200, but keep in mind that the majority of SOLIDWORKS video tasks are done on CPU and RAM.” 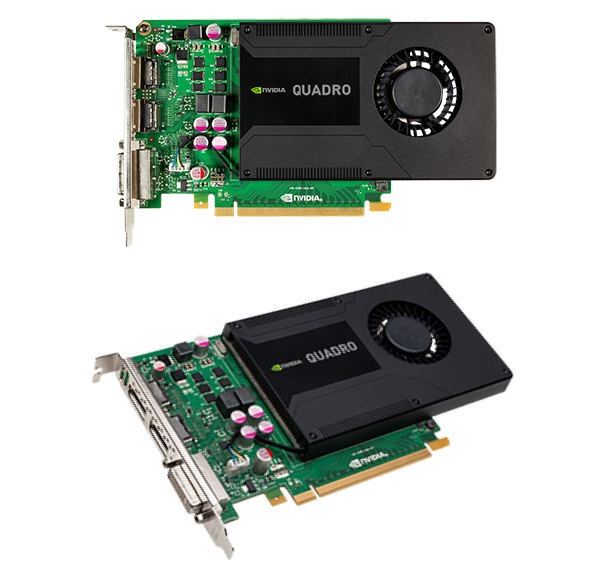 At BOXX, we recommend the NVIDIA Quadro K2200 as an ideal mid-range graphics card for most SOLIDWORKS workflows and the CATI experts are quick to agree. “For core SOLIDWORKS design,” says Altergott, “Quadro K2200 is a good choice.” BOXX also recommends moving to a higher GPU like the NVIDIA Quadro K4200 if you are looking for the ultimate in performance in a complex production pipeline. Fanjoy and Altergott stress that if SOLIDWORKS users also rely on other GPU-needy applications like Adobe Photoshop or more specialized software like Abacus, a higher grade GPU is definitely a good idea.

Time is money. To illustrate the benefits of a BOXX APEXXworkstation, consider a representative SOLIDWORKS user and the daily tasks he performs which are restricted by CPU clock speed. For example, our user is running SOLIDWORKS on an Intel® Core™ i7-4770k (3.5GHz) system. On average this user needs to rebuild a model ten times daily, which requires six minutes per rebuild. This represents one hour of “wait time” daily using the single 3.5GHz core. A BOXX APEXX workstation, with clock speeds up to 4.5 GHz, will perform those same tasks 20% faster (or more). If our SOLIDWORKS user earns a rate of $43 per hour, look at the costs savings that can be realized if he uses a BOXX APEXX workstation. 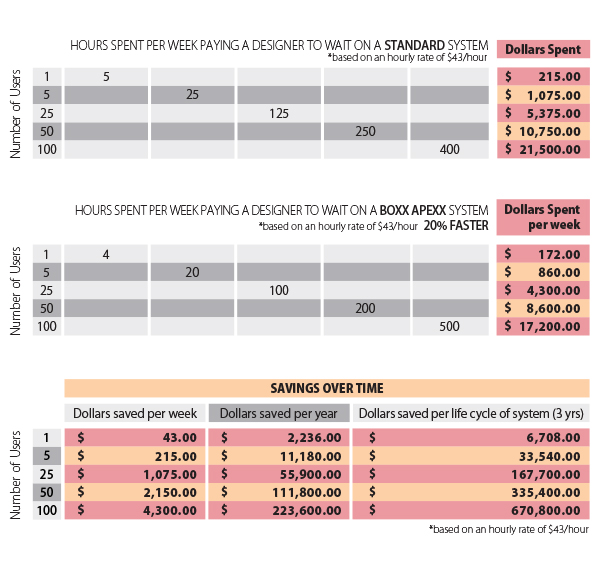 The calculation here is relatively simple. Your choice of hard drive makes a significant impact on performance - especially if you lack sufficient RAM with which you can take advantage. As for Fanjoy and Altergott, both are staunch proponents of solid state drives, standard features in APEXX workstations. “With SSD, the workstation boots up and loads faster, so it’s worth the expense, assuming your company is using a good data management as well. And you don’t necessarily need a huge drive especially if you can rely on a secondary drive for additional storage.”

The Case for Dedicated Rendering