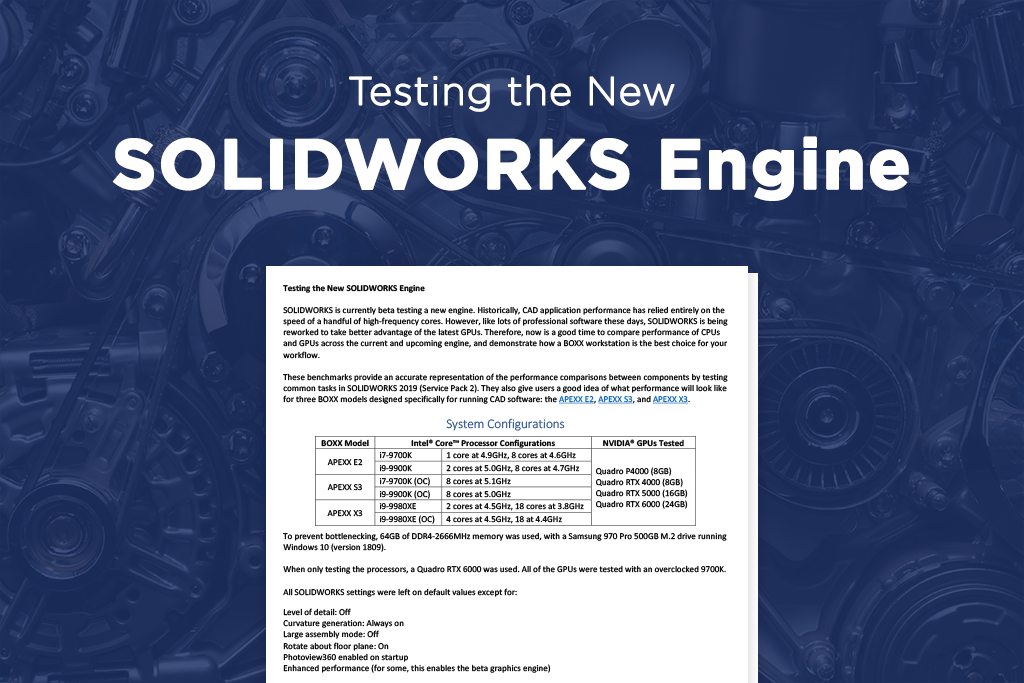 SOLIDWORKS is currently beta testing a new engine. Historically, CAD application performance has relied entirely on the speed of a handful of high-frequency cores. However, like lots of professional software these days, SOLIDWORKS is being reworked to take better advantage of the latest GPUs. Therefore, now is a good time to compare performance of CPUs and GPUs across the current and upcoming engine, and demonstrate how a BOXX workstation is the best choice for your workflow.

These benchmarks provide an accurate representation of the performance comparisons between components by testing common tasks in SOLIDWORKS 2019 (Service Pack 2). They also give users a good idea of what performance will look like for three BOXX models designed specifically for running CAD software: the APEXX E2, APEXX S3, and APEXX X3.

This post only features benchmark highlights. For an in-depth look at our data and methodology, click the icon below:

The overclocked 9700K and 9900K performed virtually identically in the new engine, and gave the best viewport performance out of all the configurations. This is not surprising, as SOLIDWORKS is designed to function best on a small number of cores at high frequency. In general, times did not change much for any of the CPUs tested across current and new engines, however load times were slightly higher for the overclocked 9980XE in the current engine, while they remained much the same in the new.

Frames per second evened out noticeably for all CPUs in the beta engine, while the current engine maintained an extremely low fps (<4 fps) with the 9980XE (stock and overclocked). This is of course due to the heavily CPU-bound nature of the current engine.

As expected, render times did not change much between the current and new engine when only comparing processors. Across both engines, the 9980XE (stock and overclocked) performed best, achieving >2x faster render times compared to the 9700K. 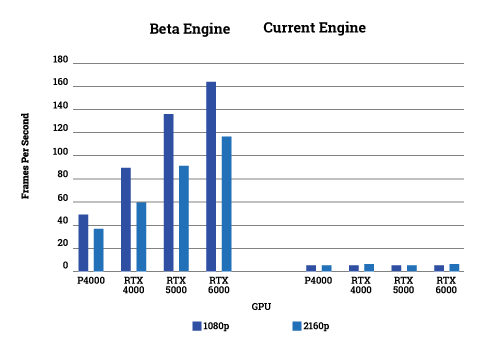 We saw no improvement in fps in the current engine among any of the GPUs. They all performed basically the same, achieving around 5 fps. Of course, we chose the same settings for the current engine and the beta to show the drastic difference in performance between the two versions. Realistically, if using the current engine, the user would trade some visual fidelity for a more workable model and get around 20–30 fps.

The biggest takeaway between the two engines was the reduction in rotation time, going from around three minutes in the current engine to ranging between 5–20 seconds in the beta engine.

Regarding upcoming SOLIDWORKS releases, a single Quadro RTX 4000, P4000 or even P2000 should be sufficient for most users’ basic needs. That said, the Quadro RTX 4000 falls right in the sweet spot when considering both price and performance. However, if your workflow includes extremely complex models, multiple displays, or you work in UHD (4K/8K), a multi-GPU setup with Quadro RTX cards would be
beneficial.

Regardless of the processor, using a Quadro RTX 4000 (or higher) would also be beneficial if users want to utilize multiple monitors at once, and/or drive multiple CAD software instances at once. Of all the models we compared, the APEXX X3 has the highest GPU power budget (1,000 watts) to allow for the most high-end video cards in a single system.[1]

If you work with complex models at 2160p and want to maintain a comfortable 60 fps, an Intel® Core™ i7-9700K (non-overclocked) combined with an NVIDIA Quadro RTX 4000 is a good solution. That can be found in the APEXX E2. However, it’s also worth noting that the percent advantages of professionally overclocked processors (5–10%) translate relatively linearly to more time-consuming operations that users may be dealing with. For example, if you want to add the fastest load and rebuild times, you could upgrade to the overclocked APEXX
S3, which offers more room for hard drives.

If you want a well-rounded system that provides fantastic load/rebuild times on top of blazing fast rendering, you can’t go wrong with the APEXX X3. According to our tests, adding a Quadro RTX card (or two) to the mix will yield excellent results in the upcoming engine. In that case, you’ll have a handful of high-frequency cores to build your models with, then plenty of cores to lean on when rendering. That’s why they call it the multi-tasker.