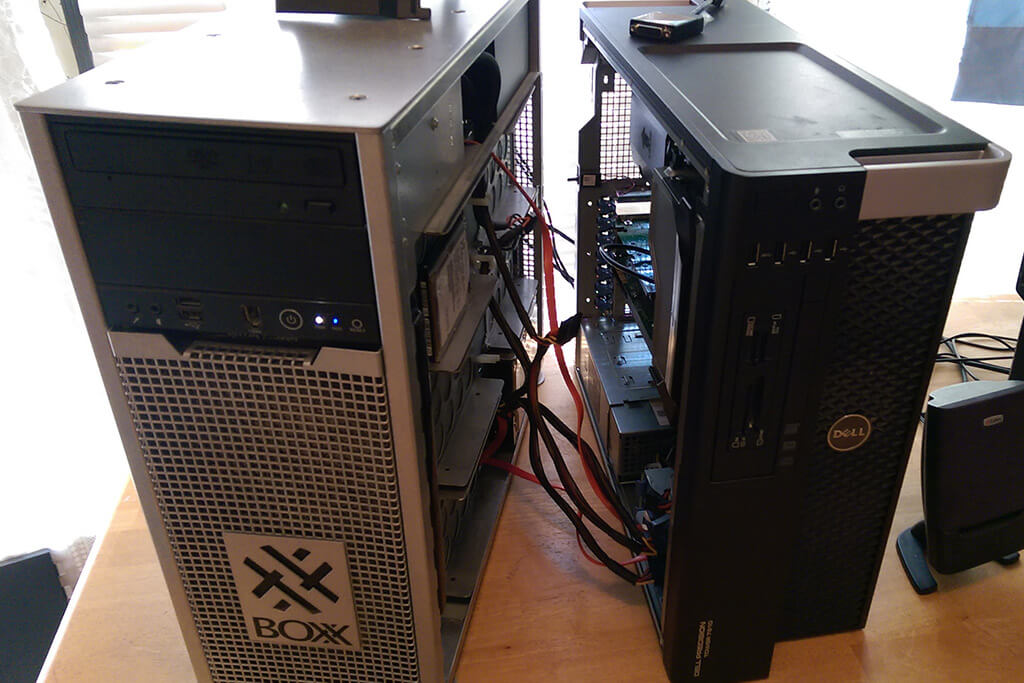 Back in 2008, I entered a BOXX contest. At the time, I was using a very old machine (1.4GHz Pentium 4, 768MB RAM, NVIDIA GeForce MX4000 128MB), and was in need of something new. I ended up winning first place—and a brand new BOXX workstation! It was a 3DBOXX 8450 Special Edition equipped with overclocked dual quad cores, 4GB of RAM, and an NVIDIA Quadro FX 1700 GPU. Eight cores running at 4.0GHz was a HUGE improvement over what I had. Throughout the years, this workstation had been a major help in getting work done . . . and that ties in to my recent debacle with Dell.

A couple of years ago, I was given a $15,000 Dell workstation with dual Intel Xeon processors (44cores/88-threads), 64GB RAM, and an NVIDIA Quadro M4000 GPU. When it came time to render out animations, this machine came in handy, being able to quickly knock out renders. It soon became my main workstation, replacing the old, worn out BOXX. But not long after using the Dell, it started giving me problems. It was taking too long to boot, it was crashing, and I kept getting the error message about the file "iastorb.sys".

After spending hours online reading about other Dell users who had the same problem, the solution was to unplug the optical drive (DVD drive) from the motherboard. That was only one of many other issues. As for the last few weeks, it no longer wants to boot up. I have to continually turn it off and on before it does anything. According to the Dell site, the warranty has expired, so that means I'll probably have to pay for support. Keep in mind that this is all happening in the middle of two very big jobs. I had a rather long animation to put together, as well as five other modeling jobs, and the Dell decides to do this right in the middle of it all. On my end, I did everything I know to do in order to troubleshoot the issue. I ran several Dell pre-boot tests, which all came back fine. No issues. I removed and re-seated the RAM, GPU, HDDs, power supply, and all connections with no improvement.

What was I going to do?

I remembered that I had my old 2008 BOXX but... was it going to boot up? Would it even have power? For a few years (since the last time I used it), it had been sitting in its original box. I took it out, plugged it in, and it booted up without any problems! Granted, it’s only eight cores and does not have an SSD, but I didn't care—as long as it was working! I ran the SATA and power cables from the BOXX over to the Dell in order to use the Dell’s HDDs. Both machines sitting side-by-side with their panels opened looked like the Dell was on life support. Thankfully, because the old BOXX was still working, I was able to complete the jobs. On the other hand, the Dell is still having issues. I was able to get it to boot to assist with rendering, but have yet to resolve and fix the issue. Had it not been for the 12-year old BOXX, I would've been hard pressed to do something in order to get the jobs completed.

As far as I'm concerned, I will continue to hold on to the BOXX as a rugged backup in case I need it. Sure, it might be 12-years old, but there’s a lot to say for a machine that’s able to boot right up and save the day when a $15,000 Dell fails.