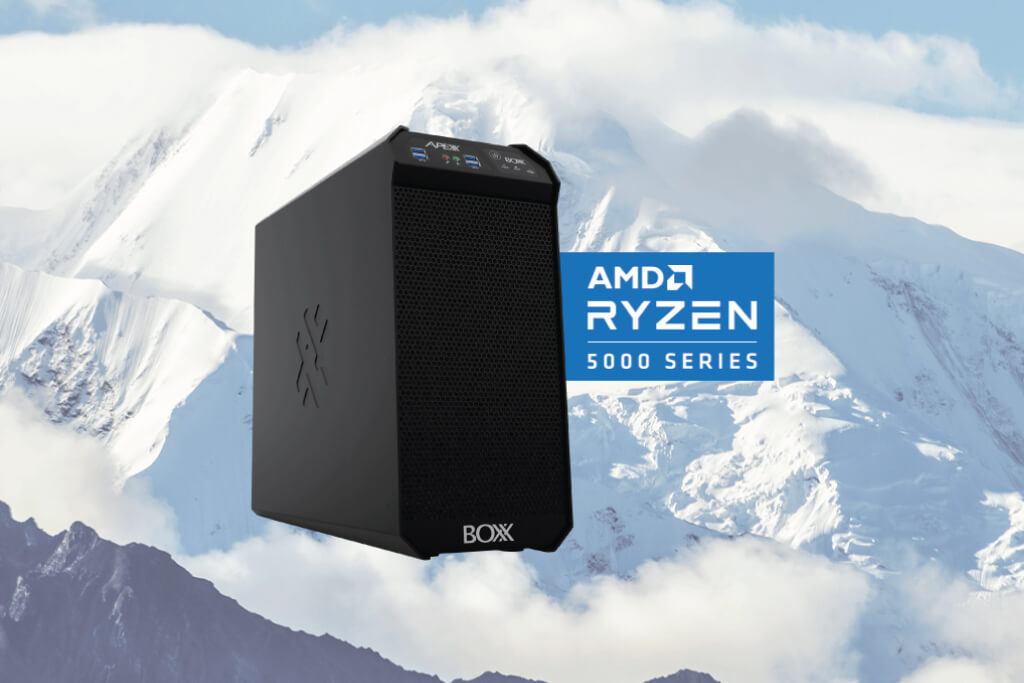 AMD Reaches the Summit with Ryzen 5000

First came the AMD Ryzen Threadripper, the high performance CPU which signaled that AMD, amid a sea of Intel processors, was ready to be taken seriously again—especially by post production professionals working in media and entertainment. In fact, the 3rd generation Threadripper is key to APEXX T4, the first Avid-qualified BOXX workstation also noteworthy for a few other firsts: first Avid-certified AMD CPU, first single CPU with 64-cores, and the first (and only) CPU that can edit 8K RAW video. Now, AMD is back with another new processor and once again, it’s resoundingly clear that within the CPU marketplace, they are firmly planting their flag.

The new AMD Ryzen™ 5000 Series processors have arrived, and although much of the online hype surrounding them focuses on gaming, don’t be distracted by it (unless you’re big into gaming, of course). The fact is, these CPUs are outstanding for creative pros, delivering best-in-class performance[i] for a variety of professional software applications from CAD and 3D design, to motion media, VR, and more. The new processors provide 16 cores/32 threads at 4.9GHz with available overclocking through performance boost overdrive[ii] (PBO), up to 40 PCIe® 4.0 lanes, and 19%[iii] instructions per cycle (IPC) improvement over the previous generation.

If that’s not enough good news, these state-of-the art processors are available now inside the BOXX APEXX Denali A3 workstation. Denali, you ask? Yes, because this machine will enable you to reach the summit of application performance, conquer your most demanding workflow, scale new heights of creativity/productivity and…APEXX Mount McKinley (the highest North American peak’s former moniker) doesn’t exactly roll off the tongue. Kidding aside, Denali, powered by this processor, is indeed a game changer and as always, BOXX is first to market because of our decades-long commitment to providing creators with the best technology as soon as it becomes available.

In addition to the Ryzen CPU, the liquid-cooled Denali boasts up to two professional-grade AMD Radeon Pro™ or NVIDIA® RTX™ GPUs (with next gen NVIDIA Ampere upgrades available by year’s end), up to 128GB of RAM, best-in-class connectivity with 10GB Ethernet and Thunderbolt 3, and Samsung 980 Pro PCIe® 4.0 NVMe SSDs for maximum graphics and storage throughput.

APEXX Denali with the AMD Ryzen 5000 Series CPU is highly configurable, so call a BOXX performance specialist today at 877.877.BOXX to configure yours, or order online at www.boxx.com.