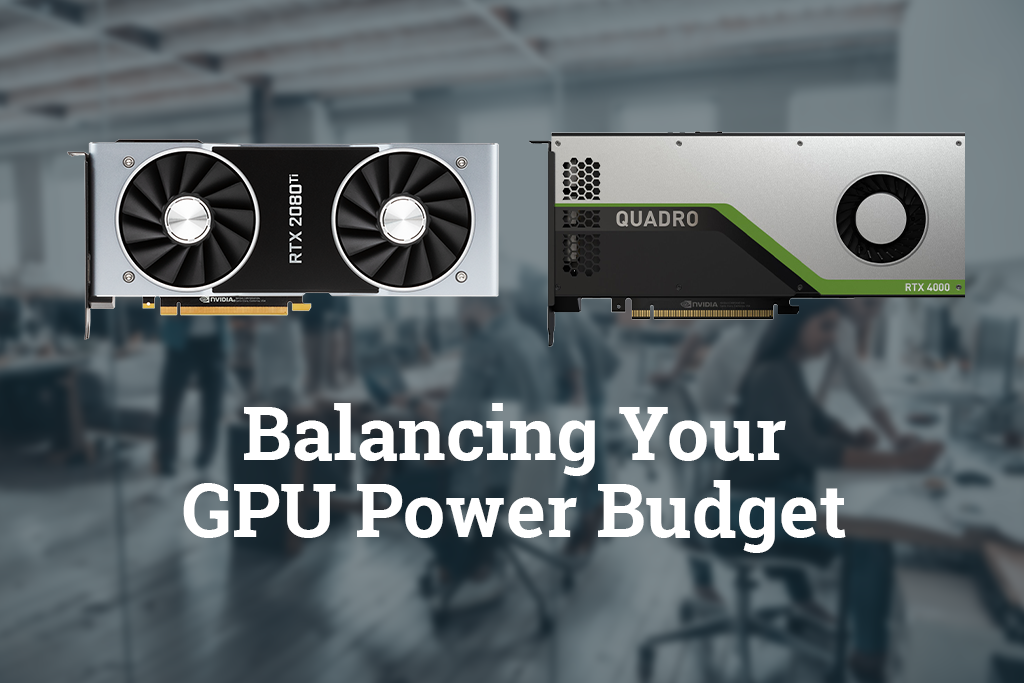 While the rate of increase of CPU frequency has plateaued over the last several years,1 overall performance of high-end GPUs continues to rise.2 Meanwhile, burgeoning industries like AI and Big Data are demanding better performance for unprecedented workloads. Thankfully, companies like NVIDIA have been pumping out faster and more efficient products to meet those needs, and BOXX has risen right along with them.

However, with more power comes higher power consumption. For example, a single GeForce® RTX™ 2080 Ti, NVIDIA’s latest flagship video card, can pull 250 watts all by itself. On top of that, more workloads are becoming dependent on the capabilities of the GPU to get more throughput. Therefore, it seems wise to talk about workstations through the lens of current GPU power constraints. Knowing how many video cards you need for your workflow, and taking stock of the total wattage your system can maintain, is a great way to help determine which BOXX model is right for you.

Let’s take the APEXX X4 as an example. It’s a perfect solution for editing feature films, deploying VR experiences, or any workflow that requires a high core count coupled with high frequencies. With its hefty 1500-watt power supply, it has a GPU power budget of 1,000 watts. With that, you can power four full-size dual-slot GPUs. That said, there is another factor at play that could influence your final build. There are several CPUs that can be bought with this model,3 and one of them—the Intel® Core™ i9-9980XE—is sold with the option to be overclocked.4 However, overclocking that CPU requires additional power (about 300 watts). Meaning, if you want that higher clock speed on those cores, you lose the power budget for a fourth 2080 Ti.

So why not just use a bigger power supply? Sure, you can build a workstation with a 2-kilowatt PSU, but odds are you won’t be able to reliably draw enough power. If you’re using a 15-amp outlet, which is common in the United States, you’re limited to 1800 watts before the breaker trips, or even less if it’s under continuous load. It’s easy to see that you could run the risk of overloading your circuit, which won’t get your work done any faster.

However, sometimes compromising isn’t an option. If your workflow absolutely demands every last one of those 2080Ti’s, there’s no reason you need to settle for less. We have several models that can comfortably run four of the highest-performing cards on the market in a single chassis. We even have some systems that offer full support for up to eight dual-width GPUs for the most intensive GPU workloads imaginable

But let’s go even further. In any multi-GPU setup, the primary limiting factor to higher throughput is the motherboard’s ability to send and receive data to and from the GPU. If you want to achieve maximum performance from those 2080Ti’s, you’ll want to add an NVIDIA NVLink bridge to the equation. The bridge allows for much higher bandwidth and very lower latency, which is vital when performing highly parallelized tasks like rendering or deep learning. That said, it also increases GPU power consumption, so depending on the power needs of the other components, you may need to switch to a model with a larger PSU. But regardless of your specific configuration, BOXX has a solution for you.

One final note on GPU power consumption. When we say a video card pulls 250 watts, that does not mean it does that all the time. In fact, the 2080Ti, when not under load, draws only about 17 watts. Much like power supplies, the power draw for a video card at any given moment depends on the needs of the task at hand. The benefit of having a high-wattage PSU is to increase overall power efficiency and provide a high enough power ceiling to accommodate all devices for all conceivable computing tasks.

If you want to know more about your specific workflow, consult a BOXX performance specialist.5 They not only know hardware, they also know your software. With years of experience and expertise, they can help you figure out which configuration best serves your needs.