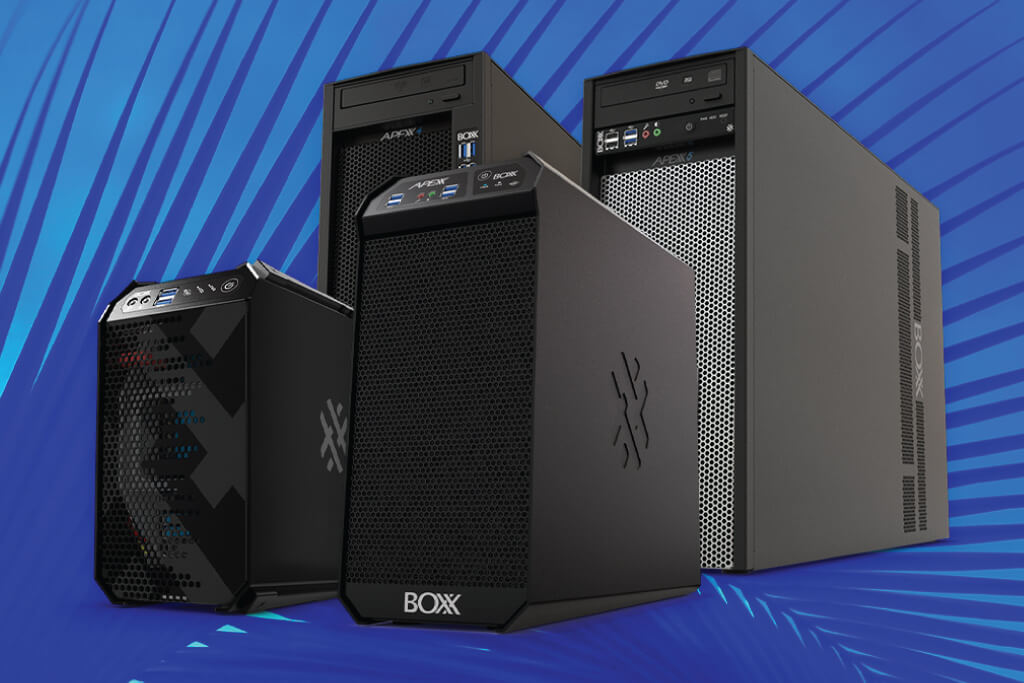 Fitting into a BOXX: An Exercise in Decision-Making

There are a number of things creative professionals should consider when choosing a new workstation. Among the most important is knowing you’re getting your money’s worth, both in the short-term and the long-term. To do that, you need to know exactly which hardware is best for the software you use, and to do that, you need to look at benchmarks. Today, I’ll be going through one workflow example and decide which BOXX system is the best fit.

Let’s say your current system could use an upgrade, and your workflow involves creating models in Revit, followed by exporting those models to Blender for rendering.

Next, let’s decide on three goals for your new workstation:

Before we get to the benchmarks, it’s good to point out that I chose models that all use the same chassis in an effort to normalize the price comparisons. However, within each class, you often have a couple chassis options depending on things like how many hard drives or GPUs you want. For example, the APEXX X3 offers up to two GPUs at full bandwidth and up to two 3.5” hard drives, while the APEXX X4—which uses the same processor—offers up to four 3.5” hard drives and up to four GPUs at full bandwidth.1 Additionally, know that there is some overlap in the CPU options for some models.2

Blender is a tile-based renderer, which means it subdivides rendering jobs into many discrete sections that are completed in parallel. The more CPU cores you have, the more sections can be completed simultaneously, and the faster you can complete a render job. Knowing that, it scales much like you’d expect, with higher-core processors showing progressively shorter render times.

I’ve also included an approximate starting price for the CPU configurations shown. It’s important to note that prices can and often do fluctuate, especially when customizing a system (e.g., adding hard drives, more RAM, video cards, etc.). The numbers used here are approximations and intended only to be used as a means for comparison.

Assuming you plan on rendering in Blender on the CPU, it makes sense to choose a model with a high core count. Let’s say your current rig is a few generations behind and takes about 25 minutes to finish this benchmark. The 16-core APEXX A3 would provide a three-fold decrease in render times. This one seems like the sweet spot, as the cost goes up substantially after that point, and you still get a large boost in performance. However, more expensive models like the APEXX X3 and T3 have extra benefits as well, such as higher memory capacity (256GB vs 128GB) and additional PCIe lanes. More memory would help larger scenes finish faster and facilitate multitasking, while extra PCIe lanes can be important if you, say, use a plugin that scales with multiple GPUs, like V-Ray.

Let’s move on to Goal #2. Most tasks in Revit are lightly threaded, and each step of model creation is calculated sequentially, which means having lots of CPU cores doesn’t help. Instead, a higher per-core frequency is needed to speed things up (this holds true for exporting models as well), which is typically found in CPUs with fewer cores.

Overall, there is much less variability across models, with the APEXX S3 and E3 systems scoring better. The professionally overclocked APEXX S3, with its eight cores running at a stable 5.1 GHz, performed the best. And again we see the APEXX A3 models sit in the middle of the scores. However, this time the 12-core version seems more promising than it did in Blender, as it is a bit less expensive and scored almost identically to the 16-core variant. But considering the fact that speeding up model creation is a secondary goal, the ideal choice here once again seems to be the 16-core APEXX A3.

Let’s say you’re looking to spend somewhere between $3-5K on a new system, which is about average for a premium desktop workstation these days. The 16-core APEXX A3 scored well in lightly-threaded and multi-threaded workloads, which is a must for the workflow presented, and it sits comfortably inside that price range. While it isn’t the absolute best in either category, it’s certainly no slouch, and is attractively priced compared to other models that provide similar performance in either Revit or Blender.

The T-Class models are also an option, as their performance in Revit wasn’t terrible by comparison; however, they are a bit pricier, so you’d need to figure out if the extra features and time saved justifies the cost.3 If you need more than 128GB of RAM, or spending more now is going to allow you to take on a couple more projects a month, you may be able to justify the added cost rather quickly.

Based on the criteria presented—with accelerated rendering times being most important (and assuming you don’t require the features of more expensive models)—I’d call the 16-core APEXX A3 the best fit. It’s also a good choice in terms of future upgrade prospects, as it is currently compatible with the fastest PCIe Gen 4 M.2 SSDs on the market, and will be ideal for future PCIe Gen 4 video cards.4 Those Gen 4 devices only need half as many lanes to provide the same data throughput as Gen 3,5 which means that even with the limited number of PCIe lanes on the APEXX A3, you’ll be less limited than if you got a model with a similar amount of lanes on another CPU platform.

BOXX is committed to finding the workstation that best matches your workflow. We also use premium components that are built to last and accelerate your productivity for all sorts of applications across several industries. If you’d like to learn more, give us a call (1-877-877-BOXX), or consult with a BOXX performance specialist today.

1 Click here to see a full breakdown of all our desk side systems.

3 The APEXX T3 also can be configured with a 64-core CPU, however the cost of that configuration fell outside the bounds of this exercise.

4 PCIe Gen 3 devices will work with Gen 4 motherboards but will only provide Gen 3-level performance.