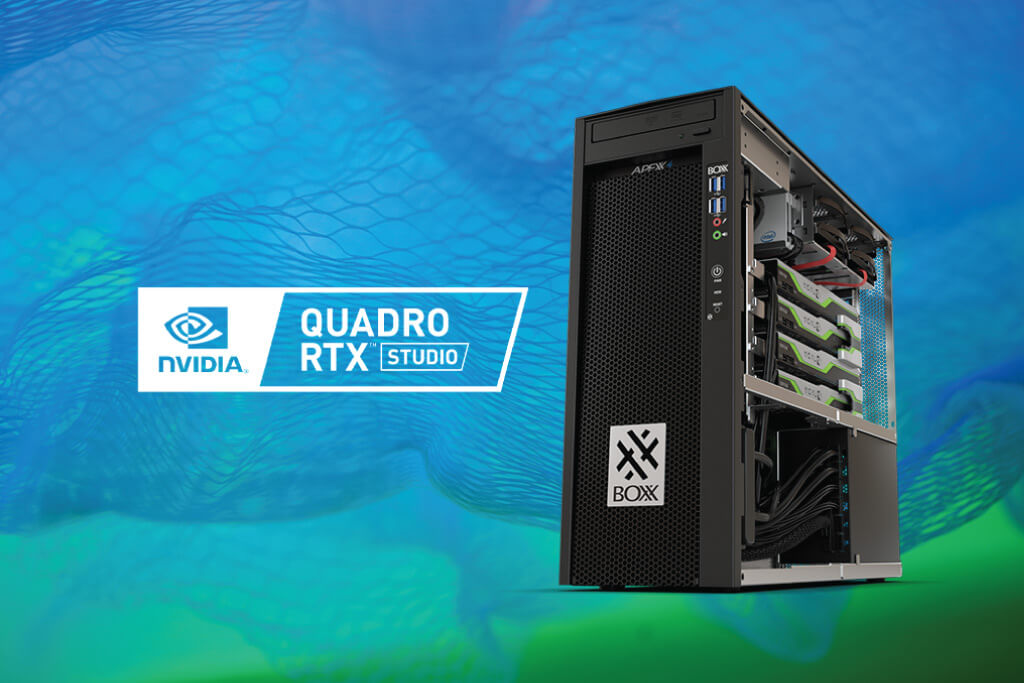 Back in August, you may recall us talking about NVIDIA’s launch of the RTX™ Studio campaign, which was designed around creating a new standard for high-performance mobile workstations for creative professionals. Now, NVIDIA has officially extended their certification program to include high-end desktops as well.

The goal is to provide an industry-wide standard for providing maximum performance for the most demanding workflows for video editing, 3D animation, graphic design, and photography. The minimum spec requirements for a workstation to obtain the coveted RTX Studio stamp are the following:

At BOXX, we’re proud that our systems have earned the NVIDIA seal of approval, but we aren’t the type to skate by on minimums. We like to go all out, and we may have outdone ourselves with one particular model: the new APEXX W4L. If you’re a content creator and are wondering what it can do, the simplest answer is, well, everything. With this workstation, the name of the game is versatility. Whether you do a lot of rendering, simulation, or rely on any sort of multi-threaded or GPU-accelerated workloads, this behemoth can truly handle anything you throw at it.

For a not-so-subtle contrast, here’s an example APEXX W4L configuration: 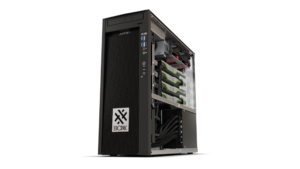 There’s also room for an additional four 3.5” hard drives, as well as an optical drive. Oh, and 64 PCIe lanes for full bandwidth across all four graphics cards. And it supports six-channel memory for unbeatable memory speeds. And the CPU is liquid-cooled. And it’s rackmountable. It also has two 10 gigabit LAN ports. In short, it has a lot of really cool stuff.

You may be wondering, what does a real-world workflow with a beastly machine like this actually look like? Just ask Sabour Amirazodi, a filmmaker and visual effects artist who’s been working with the APEXX W4L in the above configuration for the past few months. Here’s a quick peak at one of his workflows:

Sabour begins in Cinema 4D for asset creation, which relies primarily on the CPU with a maximum boost frequency of 4.6 GHz. As he’s doing that, he’ll start rendering the scene in the background with the OctaneRender plugin, which takes full advantage of all those GPUs. Also, thanks to the two NVLink bridges, it can hold entire scenes within the VRAM (48 GB per GPU coupling), which makes for faster rendering. Once that’s done, it’s on to Adobe Premiere Pro to ingest, edit, and export the final product.

You may have noticed we haven’t mentioned the onboard memory yet. But there’s still one more step—real-time rendering and live broadcasting via Adobe After Effects. This part requires a very large amount of RAM. Things like running multiple instances (Sabour has been known to run about ten at once), adding shadows or depth-of-field effects, or increasing the composition resolution all require more memory usage if you want to maintain a smooth experience, both for the workstation user and the audience watching the content. It’s a lot to ask of a single system, but the APEXX W4L doesn’t mind.

“What I’m able to accomplish on the APEXX W4L with a 28-core Intel Xeon W and multiple GPUs is incredible,” says Amirazodi. “It’s a monster that handles anything I throw at it. From fluid dynamics in real time, to massive 3D scenes and render previews in seconds, this is the solution I have been looking for and BOXX is the company I keep going back to.”

If you’re looking to maximize your creative potential and increase your ROI, check out our RTX Studio certified models or consult with a BOXX performance specialist today.

1 There are GeForce-certified versions as well, but since BOXX is aimed at professional workloads, we’re opting for Quadro.