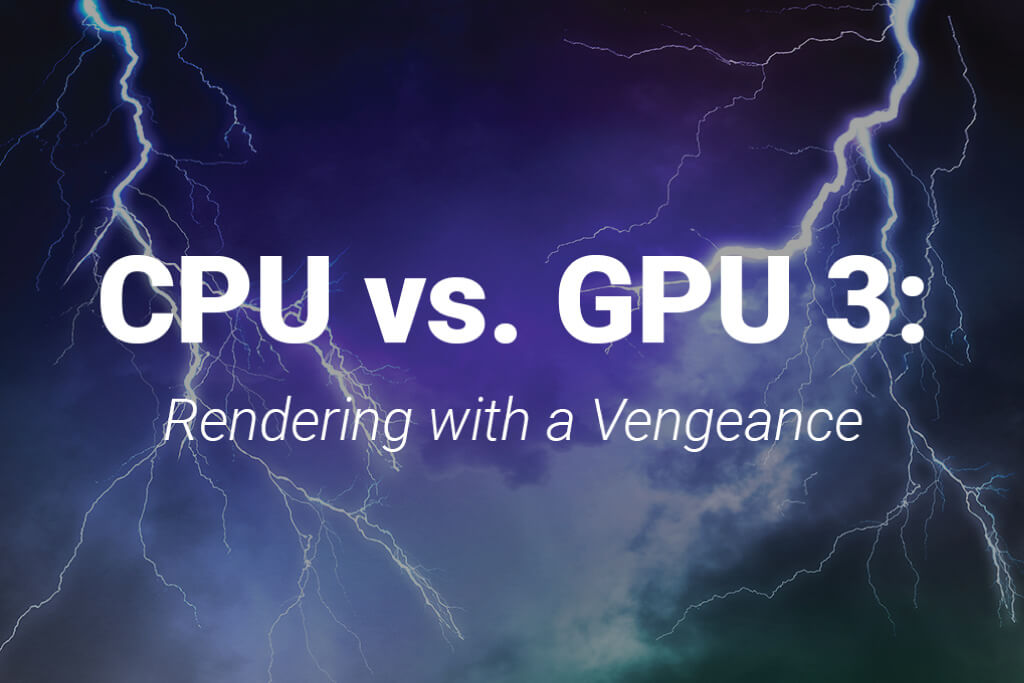 CPU vs. GPU 3: Rendering with a Vengeance

There is a clear trend these days among software vendors to incorporate more and more GPU acceleration into their products. In fact, NVIDIA recently compiled a list of hundreds of software packages spanning over a dozen industries that showcases just how widespread GPU acceleration has become.1 Everything from video editing to molecular dynamics to seismology is benefiting from the mighty computational power of modern GPUs.

In the rendering space, the idea of offloading certain tasks to the GPU has been around for over a decade, but it’s only been in the past few years that you’ve seen massive leaps in performance, largely thanks to NVIDIA’s advances with their Turing architecture and RT cores. As such, you’ve seen the software side adapt by adding more GPU-accelerated features. You have software like Arnold or V-Ray, which are both hybrid renderers, meaning you have the option to lean heavily on both the CPU and GPU when rendering. Then there’s software like Redshift, which was designed around predominantly utilizing the GPU for most rendering tasks.

And then there’s Corona Renderer. While it feels like the entire software community has been jumping on the GPU bandwagon, Corona continues to be proudly CPU-based. Why is that?

The crux of the issue seems to be the fact that the bulk of Corona’s code is based around Intel Embree, a highly optimized ray tracing kernel library that was designed to provide the best photo-realistic rendering possible on the CPU—with little to no help from the GPU. Going back and trying to retrofit their backend to become a hybrid renderer like those other guys is simply not worth the effort from a programmer’s perspective—at least not yet.

That said, Corona is not immune to evolution. Indeed, it is still fully capable of utilizing the GPU for some things when it makes sense, and it does so often. For instance, their OptiX™ denoising feature relies on NVIDIA GPUs, which is particularly helpful when you want the fastest previews during interactive rendering. Additionally, things like bloom and lens effects are boosted by the GPU.

There are also GPU hardware limitations that do not exist for CPU rendering that further support Corona’s choice to remain CPU-based. For example, the amount of memory available to render entire scenes is much more limited when relying on the GPU to do all the work. Even with the latest and greatest high-end GPUs, you can’t quite break 100GB, whereas rendering on CPUs can theoretically support over a terabyte, allowing for significantly larger scenes to rest comfortably in memory. If you routinely work with extremely complex scenes, this could easily be a deal-breaker.

Then there’s the cost. Having to buy an expensive GPU in addition to an expensive high-core CPU may not sound like the best choice for your situation, assuming you can get comparable performance without it. What’s more, GPUs also have frequent driver updates, which always has the potential to temporarily break this feature or that feature. Fixes are often swift, but any interruption to your productivity can be costly.

At the end of the day, it comes down to which choice best fits your software and your workflow (and your wallet). Some people may feel content with buying the highest core count CPU that fits their budget and be done with it. But for those willing to do some research, and maybe learn a few new tricks along the way, a hybrid rendering solution could very well serve you better in the long run. And even if you do choose the CPU-based route, the growing trend of GPU-accelerated features across so many software vendors makes including at least one of those high-end GPUs in your workstation feel like a wise choice.

Regardless of which software you choose, BOXX has the best hardware to run it. We design our systems specifically around providing the best performance for professional applications across multiple industries. Our brand-new APEXX T3, which uses AMD’s 3rd Gen 32-core Threadripper™ processor, is a perfect choice for future-proofing your content creation workstation, and will blaze through any multi-threaded task you can throw at it. Consult with a BOXX performance specialist today to learn more.